Telus’ “Expect More” campaign launched just in time: A huge amount of contracts will expire this year as a result of the new Wireless Code (introduced in 2013 by the CRTC). But how has Telus and the other wireless carriers performed in terms of customer satisfaction during the past 12 months? J.D. Power has some answers.

After looking back in time and analysing its performance, Telus was proud to say that you can start expecting more from your carriers, because they go the extra mile to keep you satisfied. But are they doing enough? Or: Who’s doing the best job in keeping their customers happy?

Well, according to the J.D. Power 2015 Canadian Wireless Customer Care Study released today, the carrier who received the highest ranking in customer satisfaction is no one else but SaskTel.

The regional player topped the list with 787 points, followed by Virgin Mobile (773) and Koodo Mobile (764).

But there is yet another reason for Telus to cheer: It is the only incumbent player among the top five carriers. It grabbed the fourth position with 745 points. The top five list is completed by Fido, with 731 points.

It’s not news that Bell and Rogers rank low in customer satisfaction: You just need to have a look at the recent CCTS report. 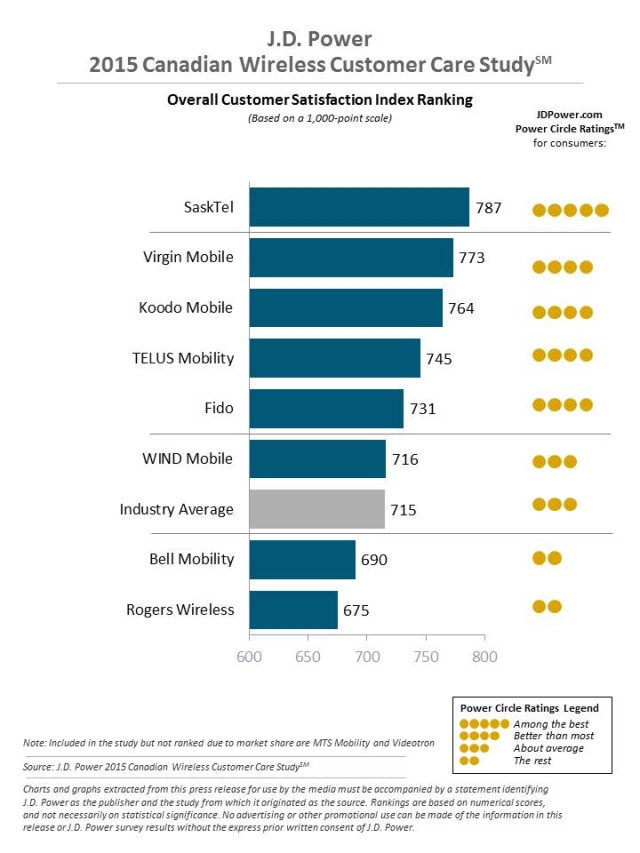 The Black Friday plans are rolling out fast and furious for 2022 from flanker brands, Fido, Koodo and Virgin Plus in Ontario. Right now, a popular discounted $30/20GB Black Friday plan for bring your own devices is being offered by all three flanker brands. Originally the plan was available from Koodo with only 15 months […]
Gary Ng
8 hours ago

After Koodo launched a $45/50GB promo plan for Black Friday today, Rogers-owned Fido has now matched this offer. That’s according to reliable mobile insider ‘Thatdealguy’ on RFD, who noted the matching offer from Fido also is eligible for additional gift cards and rewards points bonuses at retailers such as Walmart, Best Buy, The Mobile Shop […]
IIC Deals
11 hours ago

Rogers, Telus and Bell have launched new Black Friday plans today for bring your own device (BYOD) customers. The Rogers Infinite Essential plan offers 100GB of data for $75 per month (normally $85) with access to the 5G/5G+ network and speeds up to 250 Mbps. Telus is offering an $85 plan with 100GB data at […]
IIC Deals
11 hours ago