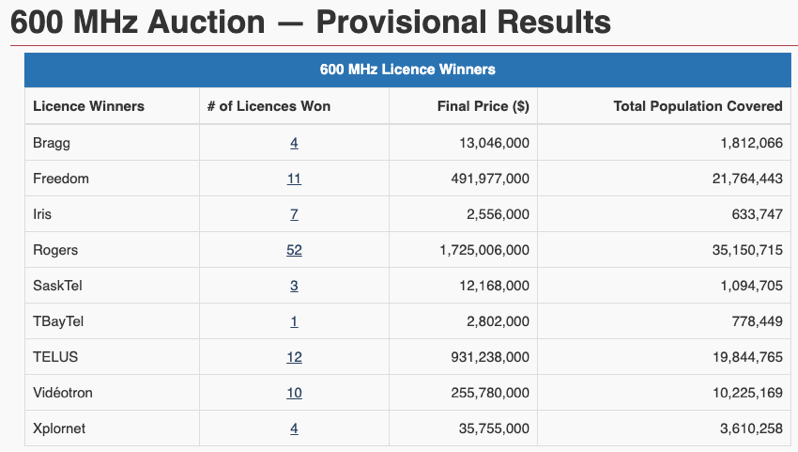 The federal government announced yesterday the conclusion of its 600 MHz wireless spectrum auction resulted in $3.47 billion in revenue from Canadian telecoms.

Rogers emerged with 50% of the 104 available licenses, spending $1.7 billion in the process. Telus spending came in at $931 million for 12 licenses, for coverage reaching nearly 20 million Canadians. Following behind Telus was Freedom Mobile with 11 licenses and Videotron with 10 licences.

Telus reacted to the results of the wireless spectrum auction by saying it was unfair the government’s set-aside of 30 MHz spectrum was made available only to “certain well-capitalized cable companies,” and not national carriers.

“TELUS secured the spectrum it needed in spite of the challenges given the set-aside design resulted in inflated pricing for the open spectrum blocks,” said President and CEO Darren Entwistle.

The Telus CEO explained the average price paid per MHz-pop by incumbents in the open was “$1.08 higher on average than what was paid by those in the set aside.” Entwistle says this disparity “equates to an approximate subsidy of $1.1 billion by Canadian taxpayers.”

Entwistle went on to say, “Disappointingly, the design of the 600 MHz auction resulted in the highest prices paid for 600 MHz spectrum in the world. In the U.S., for example, providers paid on average $0.93 per MHz-pop. By contrast, Canadian national carriers paid on average roughly two times as much, at $1.89 MHz-pop.”

Rogers did not mention anything about the wireless spectrum disparity in their press release on the matter, while Bell didn’t acquire any licenses at all, citing “600 MHz is not required for Bell to deliver broadband 4G and 5G services.”

Other Wireless Players Give Statements on 600 MHz auction

As for Shaw, they said “The addition of this 600 MHz low band spectrum will not only vastly improve our current LTE service but will also serve as a foundational element of our 5G strategy providing innovative and affordable wireless services to Canadians for years to come,” said CEO Brad Shaw.

Quebecor said their 10 licenses acquired for $256 million will be used by its wireless subsidiary, Videotron, “to continue its expansion in mobile telephony markets in Québec and the Ottawa area, and support genuine, sustainable competition that benefits consumers,” said Pierre Karl Péladeau, President and CEO, thanked in part by “sensible auction rules that allowed for a fair division of spectrum between incumbents and regional carriers.”

Iristel, parent company of Ice Wireless, won 7 licenses at the cost of $2.5 million. “This is exciting on many levels,” said Samer Bishay, President and CEO of both Iristel and Ice Wireless, adding “we can now offer the benefits of real competition to consumers and businesses in Newfoundland and Labrador and give them relief from the Big Three wireless oligarchs.”

Bishay did not mince words in the company’s press release, stating, “In less than one year, we have increased our reach from a population of roughly 115,000 in the Territories to some 1.2 million Canadians,” continuing to say, “We’ve either been sneered at or bullied by the wireless oligarchs each time we offer choice to Canadians. As I’ve said before, talk is cheap; unless it’s on Bell, Telus or Rogers phones. This is just one more indication that we are committed to competition and freeing Canadians from some of the world’s highest wireless rates.”

Winning bidders of the auction are required to pay the federal government in full by May 27, 2019.