Telus received 103,462 official requests for information about its customers in 2013, the carrier’s first (annual) transparency report reveals (via the Vancouver Sun). 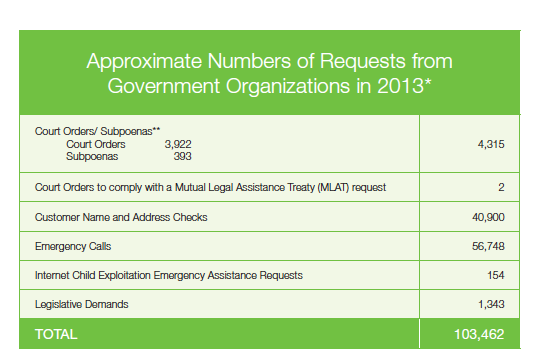 Of those requests, 56,748 were emergency calls – urgent requests for help locating or assisting a Telus customer where their life, health, or security was at risk. This means that Telus will provide police or other emergency responders with location information.

Another big chunk of those requests were customer name and address checks, for providing basic customer information to identify an individual associated with a telephone number.

The number of requests, however, doesn’t equal the number of Telus customers affected, as most court orders request information with respect to more than one customer.

The transparency report reveals other tidbits of Telus’s privacy policy, such as the carrier’s keeping customer information as long as necessary to comply with the law – it retains copies of customer bills for about 7 years, and call detail records for billable calls made by customers, for up to 14 months. Also, it’s good to know that Telus retains logs of Internet Protocol (IP) addresses for a period of 90 days for network management purposes.