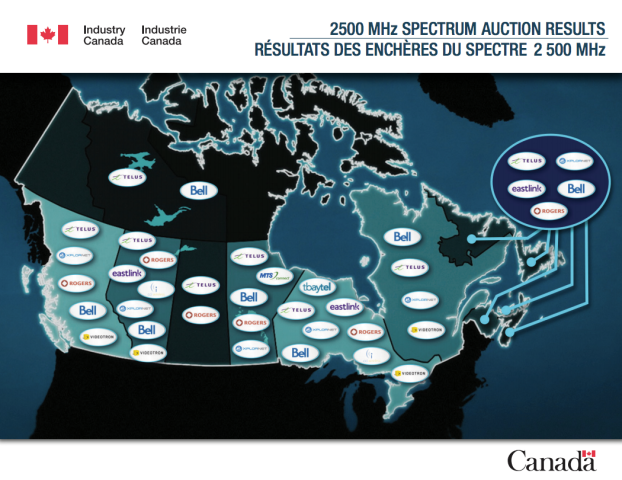 In line with earlier predictions, Telus won big this time (although it has to shell out some money): The carrier won the majority of licences, as the other two incumbent players were unable to bid in certain geographical areas.

The second-biggest spender was Vidéotron, which spent $186.95 million for 18 licences in Québec, Ontario, Alberta, and British Columbia. For Vidéotron, the new acquisition brings a 28% increase in spectrum holdings.

Bell and Rogers recorded only 5% and 4% increases respectively in spectrum holdings as a result of their bids at the 2500 MHz auction. Fact is, their spending was quite limited: $30 million for Bell, and $24 million for Rogers.

Interestingly, the emerging carrier Wind Mobile, which scored big at the latest AWS-3 auction, was unable to successfully bid for a licence in any of the available areas this time.

“The 2500 MHz auction was a success because it was designed to put the interests of Canadian consumers first. We have kept our commitment to Canadians to put more spectrum in the hands of wireless companies, and now Canadians—especially those in rural areas—will benefit from more choice, lower prices and better service,” said ames Moore, Minister of Industry.

As Industry Minister announced today, nine companies secured spectrum during the auction. The government raised a total of $755.37 million in revenue, which will be reinvested in priorities that matter to Canadians, the press release states.

SaskTel announced on Wednesday it will waive long distance and text messaging fees from Canada to Turkey and Syria, to allow customers to stay in contact with friends and family affected by the recent devastating earthquake. “Our hearts go out to everyone who has been impacted by the deadly earthquake that struck Syria and Turkey […]
Gary Ng
2 hours ago

Here are the latest Canadian cellphone plan and device deals, plus other promos from wireless carriers such as Rogers, Telus and Bell, from our partner PlanHub. As always, the promos and plans may change at the last minute, but here they are as of Wednesday, February 8, 2023. Check them out below… Bell Noticeable price changes: Samsung […]
iPhoneinCanada.ca
5 hours ago

Vancouver, B.C., resident Erica Phillips last week was finally able to rid herself of the daily calls from collections agencies hounding her to pay hundreds of dollars owed on a Bell Mobility account that had been fraudulently created in her name by someone who stole her identity — reports the CBC. "It's a huge sense of...
Nehal Malik
9 hours ago