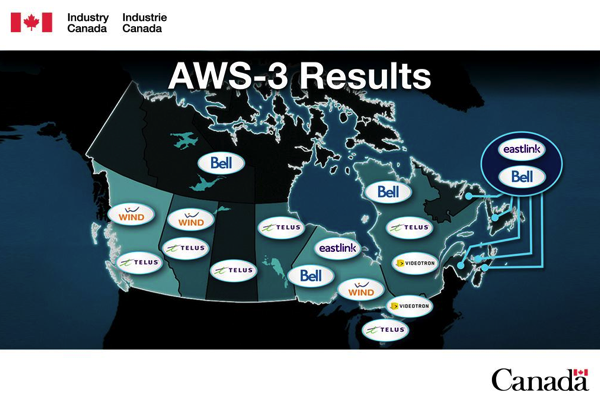 Ottawa held a sealed-bid auction for the AWS-3 spectrum allowing wireless players access to valuable airwaves. Wind Mobile was competing against Mobilicity in the three areas in which it operates, but – in line with yesterday’s Financial Post report – the latter apparently remained without financing, which prevented the bleeding carrier from making a viable bid.

That was just perfect for Wind Mobile: It obtained AWS-3 airwave licences in British Columbia, Alberta, and Ontario, for an entry-level bid of $56.4 million, increasing its spectrum holdings by 180%.

“Spectrum is a vital public resource and it is the government’s responsibility to allocate it in a way that encourages robust competition and choice in the wireless market. The result of the AWS-3 auction supports our government’s policies of delivering more choice, lower prices and better service on the latest technologies,” said James Moore, Minister of Industry.

.@Windmobile acquires spectrum in BC, AB, ON, increasing holdings by 180% pic.twitter.com/IcK9HvIFcy

The next winner was Eastlink, which obtained licences in Newfoundland and Labrador, Nova Scotia, New Brunswick, Prince Edward Island, and Northern Ontario for $9.9 million (increasing its spectrum holdings by 77%). Videotron came out as the third winner, securing licences in Québec and Eastern Ontario for $31.8 million.

“This is tremendous news for WIND Mobile and our fantastic customers, and it’s exciting news for all Canadian mobile users, who will now benefit from true competition in wireless services for years to come,” said Anthony Lacavera, Founder and Chairman of WIND Mobile. “This much-needed spectrum will enable WIND Mobile to launch LTE and helps level the playing field against the Big Three national carriers.”

Stephen Howe, Bell’s Chief Technology Officer commented: “Bell’s networks lead in speed and success in the AWS-3 auction will ensure we stay on top. We look forward to putting this highly efficient spectrum to work for our customers as quickly as possible, as we have with the powerful 700 MHz bandwidth we acquired last year. ”

TELUS President and CEO Joe Natale said, “We are very pleased to secure such high quality spectrum across the country, and to have won 75 per cent of the spectrum available to us in this auction.