Customers of the Telus prepaid brand, Public Mobile, received some ‘switcher’ deals this afternoon to sister company Koodo Mobile, offering some enticing plans with data. The text messages appear to have targeted Public Mobile users on the company’s $38/4GB plan (after Autopay).

Public Mobile sent out the following image saying “Deal or more deal,” and detailing a $35/5GB plan or $40/8GB plan with unlimited Canada-wide calling, which includes $180 in bill credits if customers “Switch to Koodo.”

Data overages are billed at $7/100MB or $70/1GB, and this offer is small and medium tab eligible. 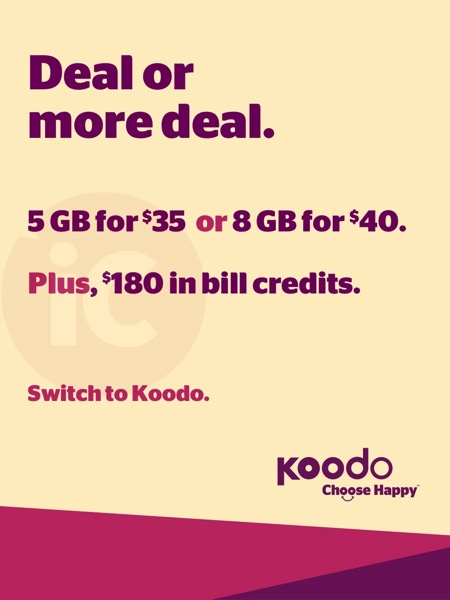 Switch to Koodo and get 5GB of data for $35/month OR 8GB of data for $40/month! PLUS $180 in bill credits. Plans include unlimited Canada-wide minutes & unlimited international text. You may be eligible for a $0 phone with the Koodo Tab. Switch online at https://Koo.do/choosekoodo or at your nearest Koodo location and use promo code JOINKOODOAUGDATA by September 4th, 2018. Offer available for 1XXXXXXXXXX. You’re included on the list for Public Mobile offers and deals. To be excluded, reply unsubscribe. *Conditions apply

Potential switchers are told to use the promo code JOINKOODOAUGDATA on Koodo’s website by September 4, 2018.

This isn’t the first time we’ve seen Telus try to convince prepaid Public Mobile users to jump over to a postpaid plan on Koodo Mobile.

Now, we’re seeing $40/8GB being offered with $180 in bill credits. Those Public Mobile users on the $38/4GB plan (after Autopay) who held out, this latest switcher offer looks the best so far.

Did you receive this text message today? Are you going to switch over to Koodo postpaid?

Two earthquakes in Turkey and Syria have occurred in a span of 12 hours, causing devastation in both nations, and now Telus and Koodo say they are now helping with relief efforts. Telus and Koodo said immediately, they are waiving all roaming charges for calls, text and data overages for customers currently in Turkey and Syria. […]
Gary Ng
5 hours ago