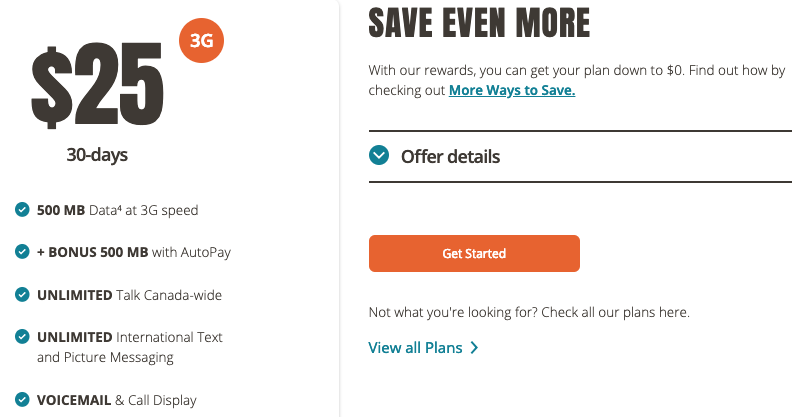 Telus prepaid brand Public Mobile is out with a new $25 per month plan, offering 500MB of 3G data, plus a 500MB 3G bonus, for those who subscribe to Autopay—which also takes $2 off, so you’re actually paying $23 every 30 days.

If you’re a light cellphone user, $25 per month with 1GB data and unlimited Canada-wide minutes is not bad, despite being on 3G data. Public Mobile’s 3G data is actually their LTE network, but throttled down to equivalent speeds of “up to 3Mbps”, but many users say tested speeds are faster.

This plan looks to be Public Mobile’s $30 per month plan, with a $5 discount. This $25 price undercuts the $30/1GB plan from Bell’s Lucky Mobile and is $10 cheaper than an equivalent offering from Rogers’ chatr.

For those logging into self serve options, you should see the new plan there. This might be an option for your kids, if they can limit themselves to 1GB of data. At least you won’t get any talk or texting overages.

If you’re signing up for Public Mobile, using a referral will get you $25 for online activations, available until March 31, 2019 (update: extended). Email tips @iphoneincanada.ca if you require a referral.