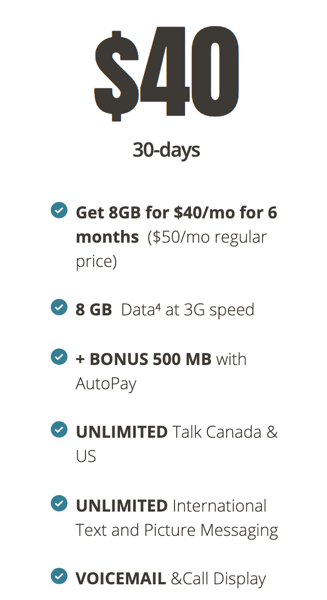 Public Mobile is launching a new promo available for this weekend only, offering up the company’s $50/8GB 3G plan for $40 per month for the first six months only. Plans with 3G data speeds are on the Telus LTE network, throttled to up to 3 Mbps download.

This 30-day 8GB data plan is at 3G speeds, but those who set up Autopay will get an additional 500MB data bonus, making the plan 8.5GB total. Unlimited talk to Canada and the U.S. is included, along with unlimited global text, plus voicemail and call display.

Public Mobile says after six months, your plan will go back to $50/8.5GB.

This promo plan is available for in-store and online activations—make sure you select the “Limited time: $50 8GB plan for $40 for first 6 months,” during your sign up. One could sign up for this plan for six months then jump ship to the next deal around the holidays.

If you sign up for Public Mobile under a referral, you can get a $10 bill credit. Email tips @iphoneincanada.ca if you require a referral.