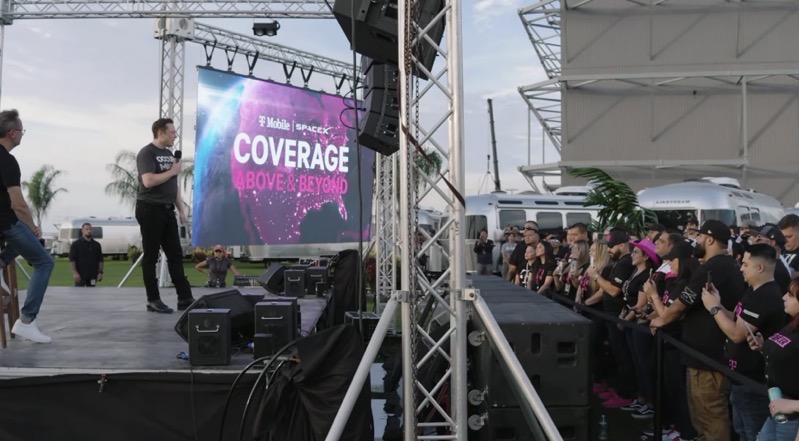 T-Mobile and SpaceX announced at the latter’s Starbase site in Boca Chica, Texas, a new Starlink cellphone service, that will be available worldwide. The backdrop of the live event featured SpaceX’s incredible Starship rockets and booster.

According to Musk, this new service will launch when version 2 Starlink satellites launch in 2023. Essentially, this cellphone service will eliminate dead zones worldwide, says Musk. It will save lives, says Musk, saying this “is incredible.”

Musk says they are building a special antenna that’s “very big” and “extremely advanced” in order to make this work. The SpaceX CEO says the new Starlink cellphone service should be able to work with phones in your pocket and in your car. Speeds should be 2-4 Mbps, offering calls and texts. “This is a hard problem that has not been solved before,” says Musk.

T-Mobile and SpaceX say they are reaching out to other carriers that want to sign up for this Starlink cellphone service for reciprocal roaming.

Will iPhone users be able to use iMessage with Starlink’s cellphone service? T-Mobile didn’t answer noting it’s a new announcement and they need to get involved with partners. The same goes for Android and messaging with Google phones.

Musk says “the phone you currently have will work”.

This service could essentially free Canadians of voice, text and data from ‘Big 3’ telecoms here, if they’re ready to open their wallets. Of course, these initial speeds aren’t as fast as LTE or 5G, but this new service will allow for your cellphone to go anywhere on earth, where Starlink satellites are available.

Again, Musk emphasizes speeds will be 2-4 megabits per cell zone, which will “work great for texting and voice calls, but not high bandwidth.”

Essentially, this service will have redundancy that no traditional telecom can offer, as Starlink V2 satellites in lower-Earth orbit will offer cellular connectivity that can withstand extreme weather and other disasters. The service will save lives, says Musk.

A Starlink cellphone service with unlimited redundancy would have come in handy during the Rogers nationwide outage (take notes, Interac).

You can watch the live event ongoing below: