TELUS has recently launched their own campaign to drum up public support against Verizon coming to town, in the form of a website called Canadaplayfair.com, which as the tagline “why the spectrum auction should matter to you.”

A button on the site allows visitors to sign a petition to send a pre-written message to Industry Minister James Moore, calling for change to make sure “the Canadian wireless market remains fair and balanced.” 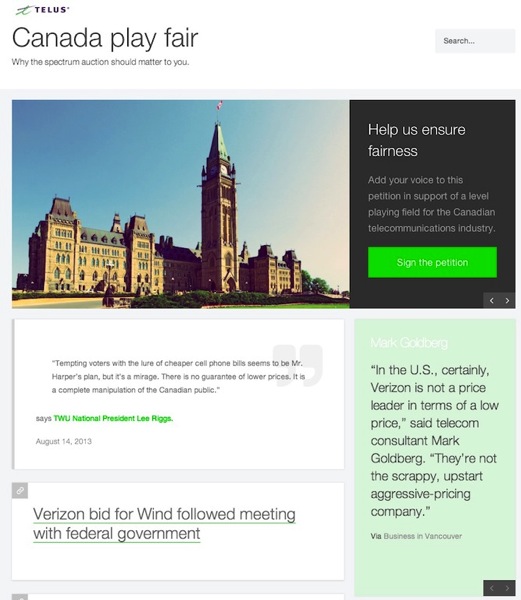 The site includes numerous quotes and links to articles (which also includes a tweet from a previous iPhoneinCanada story) arguing Verizon should be on a level playing field with incumbents at the upcoming 700MHz auction set to take place in January 2014. Unlike FairforCanada.ca, which TELUS teamed up with Rogers and Bell to create, this latest advocate site does not mention other carriers.

TELUS has also taken to publishing an “editorial” over on TechVibes, where Senior Communications Manager Donna Ramirez argues for a fair and level playing field for all wireless carriers:

I’m often asked – what does this really mean for Canadians? Lower prices? Better networks? More competition? Everyone has a different opinion, but I’m inclined to say that there are no guarantees for Canadians if Verizon comes north of the border, especially if the government entices them in with special taxpayer-funded gifts.

First things first – TELUS welcomes competition, whether from Verizon or any other domestic or foreign wireless company. We agree that healthy competition is good for Canadians. All we are seeking is a level playing field, and asking our government not to give a giant foreign company artificial advantages over home-grown companies like TELUS. We are asking our government for a level playing field that provides us with equal opportunities and fair regulations for all players.

Despite the ongoing ad campaigns by the Big Three, Industry Minister James Moore feels these PR blitzes haven’t been very successful, as mentioned in a telephone interview with iPhoneinCanada last Friday.

What do you think about this latest TELUS website asking for wireless spectrum rule changes? Are you going to sign the petition?