Last month Telus announced Drive+, its new car connected service for customers, which operates via a partnership with Vancouver-based Mojio, using a ZTE unit which plugs into a vehicle’s OBD-II port. The service was slated to launch this fall, and as of today it’s available nationwide. 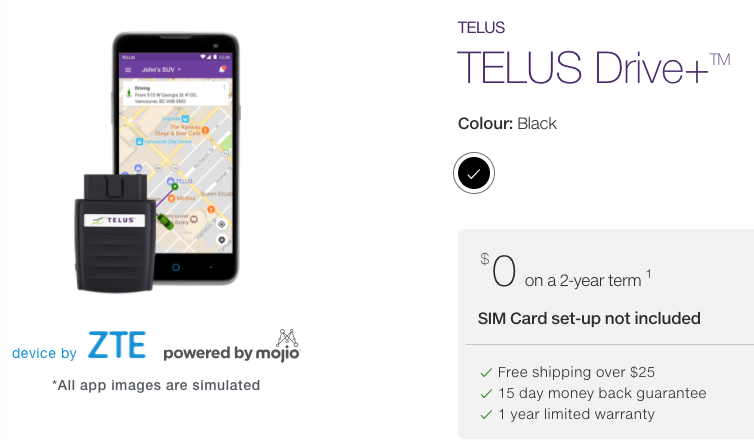 Telus Drive+ will allow users to track your car’s location, driving behaviour and set speed alerts, while also sending you notifications regarding diagnostics and car health. The ZTE unit also acts as a Wi-Fi hotspot for up to 5 devices in your car. A companion Telus Drive+ iOS app has yet to hit the App Store.

“We are excited to launch TELUS Drive+ and the Connected Car category on Canada’s largest and fastest network,” said Rob Currie, Vice President, Mobile Devices at TELUS, in a press release. “The Drive+ offering allows us to provide customers with important driving safety features, vehicle diagnostics and convenient connectivity for passengers.”

The ZTE unit is available for $0 on a two-year term (normally $200) and comes with a 15-day money back guarantee. The Telus Drive+ service will require a $15 per month plan which adds 1GB of shareable data to your Telus SharePlus or Your Choice plan.

Telus says most cars from 1996 or newer should be compatible with Drive+, as they have an OBD-II port.

Yesterday we told you about how Rogers is increasing the price of legacy unlimited Infinite wireless plans, and now it appears Telus is doing the same. According to iPhone in Canada reader Michael, Telus recently emailed him about “upcoming changes to your mobility account,” then detailing how two lines on his account were set to increase […]
Gary Ng
12 hours ago