TELUS Drive+ has been announced, a new service for Telus customers to get notified of vehicle diagnostics, track their car and stay connected via a Wi-Fi hotspot. 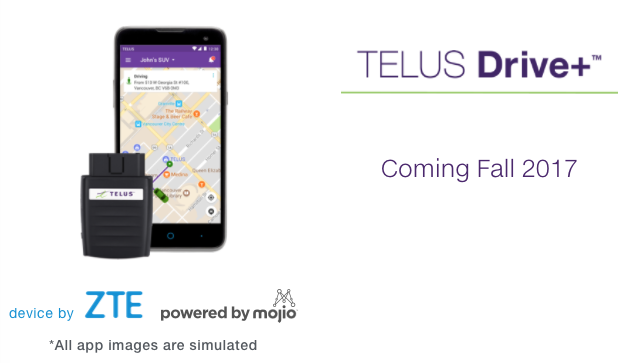 Soon, a TELUS Drive+ iOS app will hit the App Store, to let customers monitor their vehicle and its location. Users looking to subscribe to this service will require a smartphone, plus add a car to their data plan for $15 per month.

The ZTE module will work on “Most cars from 1996 and newer have an OBD-II (On Board Diagnostics version 2) port that the device plugs into.”

If this all sounds familiar, that’s because Telus Drive+ is being powered by a device made by ZTE, powered by Vancouver-bsed Mojio’s open platform for connected vehicles—the same service powering Rogers Smart Drive, announced back in July.

Rogers charges $99 on a two-year term ($200 outright), plus $15 per month for data, while a bonus data promo saw 1GB per month for 12 months. Expect Telus pricing to be similar.

No word if Bell will also introduce a similar service for their customers.

Anyone interested in these car services from Telus or Rogers?