It appears incumbents have continued to ramp up their efforts to pressure Ottawa to change their wireless rules which have been accused of favouring American wireless carrier Verizon. 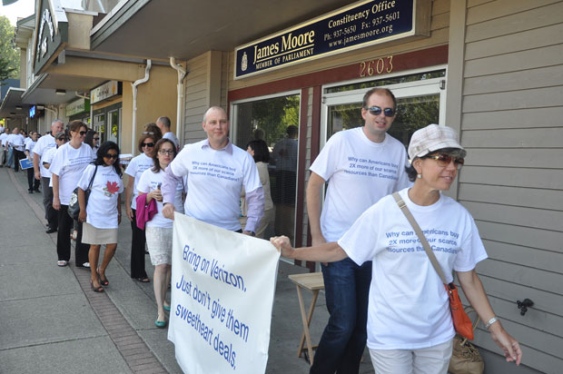 “Bring on Verizon, just don’t give them sweetheart deals”

“[It’s] a foreign company getting a two-for-one advantage over Canadian firms and that’s just not right,”

“All we’re saying is put us on an equal footing with them.”

Some TELUS employees who reside in the Minister’s riding, such as Jennifer Connors said “We’re hoping we’ll change his [Moore’s] mind, or at least change some policies that allow it to be more of a level playing field for the Canadian companies.” She went on to say 600 TELUS employees live in the Tri-Cities (Port Moody, Coquitlam, Port Coquitlam).

TELUS appears to be drumming up support from its loyal employees and business affiliates, as one of its recent dealer store chains publicly criticized Ottawa’s wireless plans as “un-Canadian.”

Industry Minister James Moore is currently on a cross country media tour to reiterate the Federal government’s plans, which are the wireless spectrum auction will take place as planned without any rule changes, despite ongoing ads by incumbents which have been classified as “dishonest” by the Minister.