At the top of the hour Apple unleashed iOS 10.2 for the masses, along with tvOS and watchOS updates too.

Part of the iOS 10.2 update brought forth the 27.1 TELUS carrier update, which has now added Wi-Fi Calling support, as noticed by iPhone in Canada reader @IAmDanBratt: 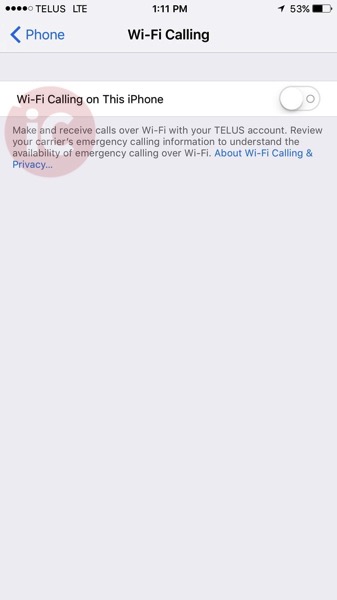 First, to trigger the carrier update, go to: Settings > General > About > and the accept the update when it pops up. Once that’s done, you should be able to get the WiFi Calling option on your iPhone 6 or newer (on a postpaid plan).

How to enable WiFi Calling on your iPhone with Telus? Go to:

Now, Apple says the iPhone 5c or newer supports WiFi Calling, but carriers have sometimes limited the feature to newer models at launch. Bell launched WiFi Calling for iPhone 6s/6s Plus users first, but eventually expanded it to iPhone 6/6 Plus and iPhone 5s users.

Currently, Bell, Virgin Mobile, Eastlink, Rogers and Fido support Wi-Fi Calling, according to Apple. A carrier update was released for Public Mobile users (27.0), but no WiFi Calling support is available.

Also, the 27.1 carrier update also saw Telus customers receive emails indicating VoLTE (voice over LTE; HD Voice) and VoWiFi (voice over WiFi; voice and texts over WiFi) are coming, as the email noted “changes to your Telus mobility account” and details the following were “added” on December 12, 2016: “VoLTE and VoWiFi Access for $0.00.” 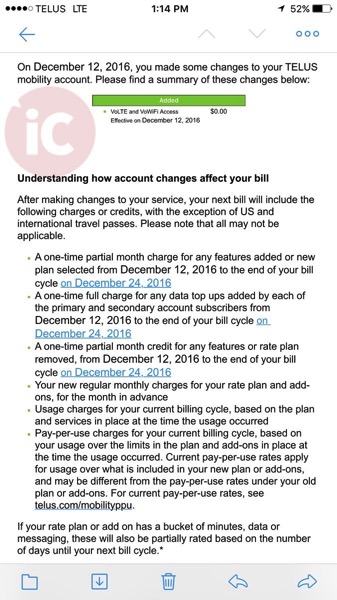 Let us know if you’re seeing WiFi Calling with TELUS and VoLTE and VoWiFI as well. Koodo and Public Mobile saw carrier updates today, but no WiFi Calling support yet.

Update: a Telus spokesperson emailed us the following regarding WiFi Calling:

Wi-Fi calling is available within Canada to TELUS post-paid customers using an iPhone 6 (or newer) running iOS 10.2 (or newer) activated on a TELUS LTE SIM card.

Telus also said there were no updates at this time for VoLTE, Koodo and Public Mobile regarding WiFi Calling, but we’ll be hearing updates soon.

If you need more clarification about how WiFi Calling will work with Telus, here’s their explanation sent to us:

We’re excited to announce that Wi-Fi Calling is now available to TELUS iPhone customers! iPhone customers can send or receive calls, text and multimedia messages as usual, but if they ever experience poor cellular coverage, their iPhone will automatically switch to an available Wi-Fi connection for a more optimal experience. Most importantly, there is no additional cost. Wi-Fi calls and messages are billed the same way as regular calls and messages sent through the TELUS network.