Ting is a wireless provider in the US which currently offers a unique set of mix and match plans many customers have gushed about, since many “save significantly” according to company CEO Elliot Noss, to the CBC.  The company is a division of Toronto-based Tucows (remember them?).

The company doesn’t have contracts and only operates on month to month plans which has proved to be popular. What’s interesting about Ting is it doesn’t have its own wireless infrastructure–it purchases network from Sprint at wholesale to resell to its customers.

As for Ting trying to start up in Canada, the company says it has been unable to purchase network from Rogers, TELUS or Bell to offer their low-cost and affordable wireless services here. Why? Because the ‘Big 3’ won’t sell it to them:

“We would love to be in Canada,” said Ting CEO Elliott Noss. “Nobody will — at least at this juncture — sell us network.”

Steve Anderson of Open Media says without access to networks from the Big 3–which hold 90% of the wireless market in Canada–this limits competition and is exactly what the incumbents want to accomplish:

“And they’re preventing them from accessing those roads so they can keep prices high and under-invest in customer service.”

However, this is set to change as Ottawa’s revised wireless policies will force Rogers, TELUS and Bell sell access to their network to a new national carrier, which at this point looks to be Verizon Wireless.

Below is a breakdown of Ting’s mix and match wireless plans. All plans include voicemail, caller ID, call waiting, tethering and no activation fees, plus voice roaming on Verizon as well. 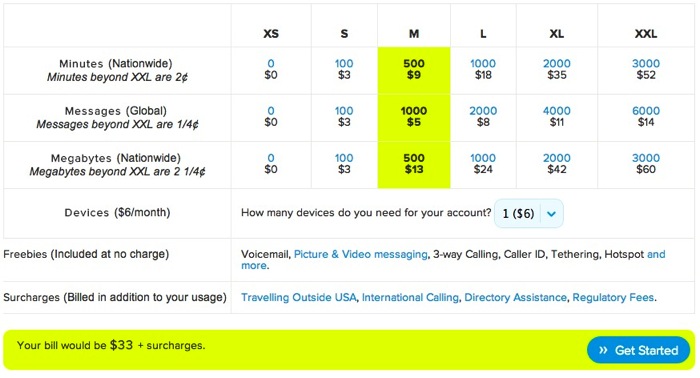 Have you used Ting in the US before?