Billionaire Pierre Karl Péladeau controls 28% of shares and 73% of voting shares of Montreal’s Quebecor, the parent company of Videotron. On the weekend, Péladeau announced his plans to run for provincial office under the separatist party Parti Québécois.

This move has suddenly put Ottawa’s plans for Videotron to be the fourth national wireless carrier in jeopardy, as now Quebecor’s controlling shareholder will be fighting for Quebec to become an independent country.

Despite Péladeau resigning as vice-chairman of Quebecor and chairman of Quebecor Media and TVA Group on the weekend and his plans to put his shares into a blind trust if elected, many have remained skeptical about his continued influence on the company.

Péladeau said even if instructed by Quebec’s ethics commissioner to sell his shares, he would refuse:

“The proxy who will receive the mandate to manage the trust will have clear and precise guidelines — and selling Quebecor is out of the question.”

“If [Mr. Péladeau] is going to be really pushing for sovereignty, it has real implications for spectrum that [Quebecor] holds across the country,” Mr. Taylor said. “I don’t think anybody in the government thought this was coming a month ago when they were declaring the spectrum auction was a great victory.”

The surprise political move has caused Videotron to be caught in the crosshairs, as according to CJAD (owned by Bell Media) customers have already started to ditch the company, switching away to rivals such as Bell.

A Bell store in Cote des Neiges saw lineups over the weekend which have not been seen since the iPhone debuted, according to employee Stephanie Huttman.

“My day began first thing this morning with two customers waiting outside the door at 9 o’clock to switch over their home services,” she said. “They were adamant about switching. They insisted this was something that was extremely important to them because of the recent developments with Mr. Peladeau.”

According to Huttman and her three colleagues, they processed 40 to 50 customers switching away from Videotron on Monday.

Videotron customers also took to the company’s Facebook page to vent their feelings about Péladeau’s move and possible continued influence, despite the company reassuring customers he would not be involved any longer: 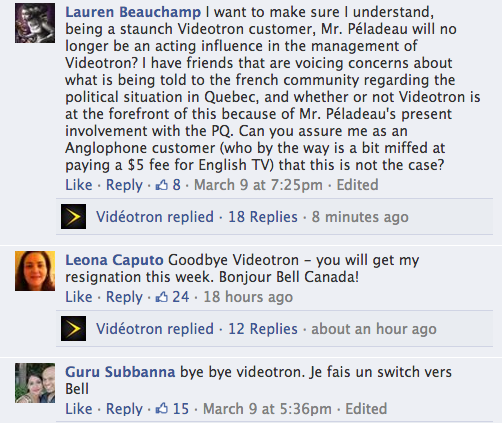 If you’re a Videotron customer—are you planning to switch away or stick with the company?

Rogers’ proposed $26 billion takeover of Shaw Communications, if successful, could deliver a $216 million payday to 12 hedge funds that bet on it — reports Reuters. The controversial and heavily contested merger has a January 31 deadline. With the Federal Court of Appeal rejecting the Competition Bureau’s appeal of the merger on Tuesday, Rogers and...
Nehal Malik
51 mins ago