J.D. Power has released their 2017 Canadian Wireless Customer Care Study, which has crowned Bell’s Virgin Mobile as the top wireless carrier when it comes to customer care satisfaction, with Telus-owned Koodo Mobile closely behind in second, followed by Videotron, making up the top three.

As you can see below, Virgin Mobile and Koodo Mobile are the only two rated ‘Among the best’, while Videotron, SaskTel, TELUS and Freedom Mobile are rated as ‘Better than most’. 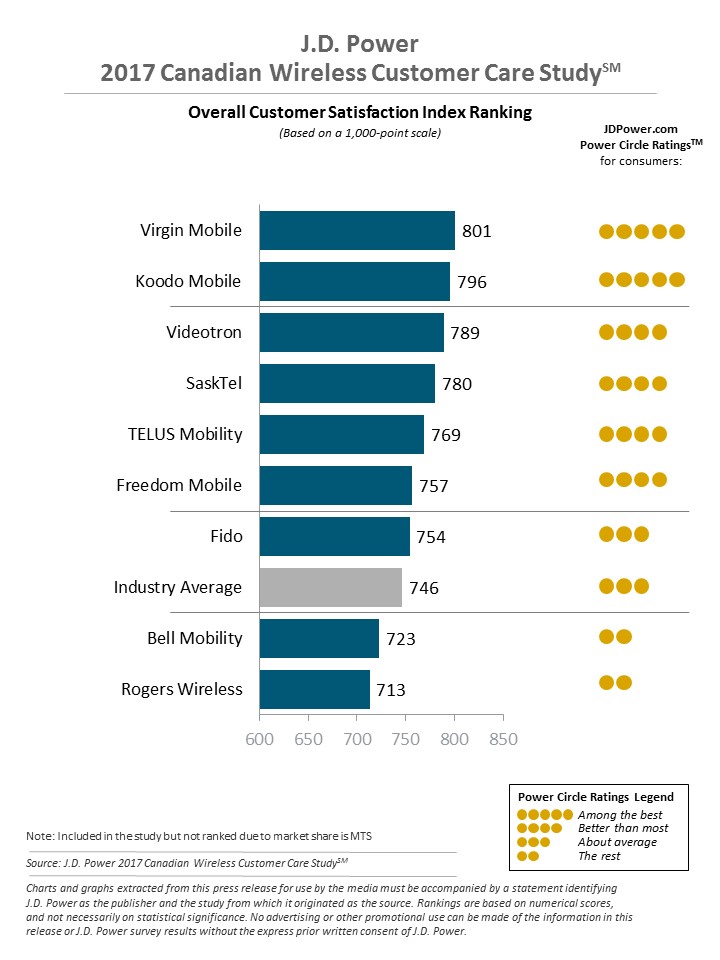 The scores are based on a 1,000 point scale, using the following ratings:

Rogers-owned Fido is ‘About average’ with a rating slightly above the industry average, while Bell and Rogers take the worst rankings, rounding out the bottom of the list.

The study concluded 40% of customers say “good customer service” and “price” tie as the top reasons for choosing their carrier, with “offered good service plan options” as a second commonly cited reason.

According to J.D. Power, “Delighted customers are those with overall satisfaction scores of 900 or higher” on their 1,000 point scale, as their study weighs “wireless customers’ perceptions of their carrier’s performance, and satisfaction is measured across four factors (listed in order of importance): phone customer service representative (CSR); in-store service; online service; and phone automated response system (ARS).”

Compared to last year, the 2017 study saw overall wireless customer care satisfaction jump only 8 points from 738 to 746. Clearly, our wireless carriers can do better.

The study was from Sept-Oct 2016 and March 2017, based on an online survey from over 5,500 wireless customers who had contacted customer service.

Peter Cunningham from J.D. Power, said in a statement to iPhone in Canada, “Moving customers into the delighted category can reduce churn, since these customers demonstrate very high levels of loyalty and advocacy.”

What wireless carrier do you think offers the best ‘customer care satisfaction’ in Canada? Do you agree with the results of the survey?