WIND Mobile announced at a news conference this morning it has now rebranded to Freedom Mobile, and is set to launch its new LTE network in Toronto and Vancouver on November 27, with other markets to come in 2017.

“As WIND Mobile, we built a strong foundation of more than a million customers,” said CEO Alek Krstajic. “And as Freedom Mobile, we are reaffirming our commitment to them and to the core principles of our business – value, transparency and fairness.”

The company’s vision now has four values: Freedom to connect and communicate, freedom from excessive and unfair prices.

LTE will expand to the Greater Toronto Area and Greater Vancouver by Spring 2017, while Ottawa, Calgary and Edmonton will go live by the summer. Existing 3G coverage areas (including southwestern Ontario, the Hamilton-Niagara corridor, Barrie, Kingston and Peterborough) will see the LTE network live in the fall. Freedom Mobile says LTE roaming will be available in the U.S. and Canada in early 2017.

The company’s LTE network will be on its new AWS-3 spectrum band, which will allow for increased speed and coverage.

Update: iPhone 5 or later models support LTE, but only Band 4 AWS, which means they won’t work on this new Freedom Mobile LTE network.

WIND Mobile’s existing 1 million customers will be automatically transitioned to the new company with no action needed on their part. The company will rebrand all its advertising this week and will see the new Freedom Mobile Halftime Show starring One Republic at the 104th Grey Cup in Toronto, presented by Shaw, their parent company.

Freedom Mobile has launched some aggressive LTE plans, some with promo pricing for 12 months that surely will put pressure on Rogers, Telus and Bell.

There is one $40/month plan (for 12 months; save $5/month) which offers 6GB of 3G data (updated), along with unlimited calls in Canada and the US, plus global SMS/MMS: 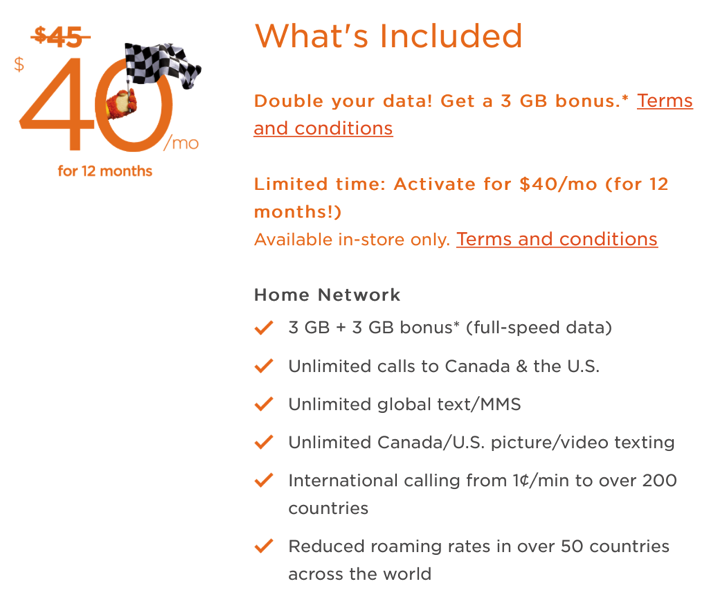 Other plans are as follows, with promo savings already applied to listed prices:

As for LTE smartphones for their LTE network, Freedom Mobile will have the LG V20 (available now) and the ZTE Grand X 4 (coming early December).

Unfortunately, there is no iPhone available yet, but the company says their hardware line up will “expand substantially and quickly in 2017”. Now that they have an LTE network, the iPhone is inevitable so stay tuned if you’re into contracts.

Maybe Telus anticipated these plans were coming with their recent Public Mobile $38/4GB promo (which Fido and Virgin have matched; check out these crazy Fido line ups in Vancouver).

What do you think of these plans and Freedom Mobile? This is great news for wireless consumers–bring on the competition.

Update: a Freedom Mobile spokesperson clarified to us via email “For launch, the plan that supports LTE data is our new $45 Smartphone LTE plan, with 3GB of data. Our Black Friday offer is $40 with double your data with 3 GB of data and 3 GB of bonus data.”