WIND Mobile lacks the one device that would definitely prop up subscriber numbers: the iPhone. But until WIND can get a decent LTE network up and running, Apple won’t come knocking on their door anytime soon. Reception and stable download speeds are essential for the iPhone experience.

What’s the next best solution to target customers that want the iPhone? Sell refurbished units, right? According to an internal memo obtained by MobileSyrup, the startup wireless entrant will sell “lightly loved” 16GB Space Grey iPhone 5s and White iPhone 5c models, coming on June 25, 2015. Each phone will come with a six month warranty.

The iPhone 5s is available for an outright purchase of $499, while the iPhone 5c is $349. Of course, customers can jump onto WINDtabs and reduce their initial cost but pay the difference within their monthly plan: 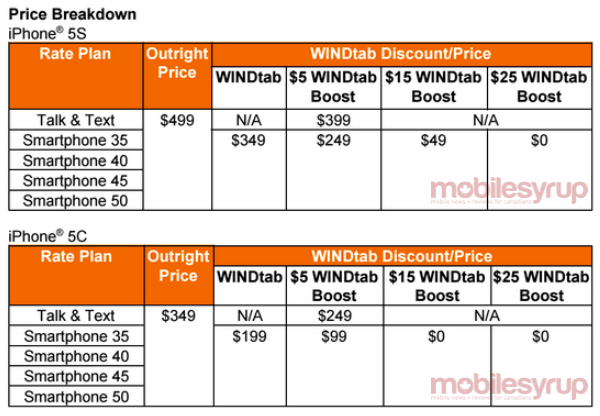 WIND appears to have sourced these refurbished units from a third party and it is unclear how many of these they will be able to get a hold of. If this is their unofficial route to sell the iPhone, they could similarly sell the iPhone 6 and iPhone 6 Plus–in a couple years?