Word leaked a few days ago WIND Mobile as set to lure unlocked iPhone 5s and iPhone 5c owners to their network with a new promo, which has gone live and is only available this weekend. 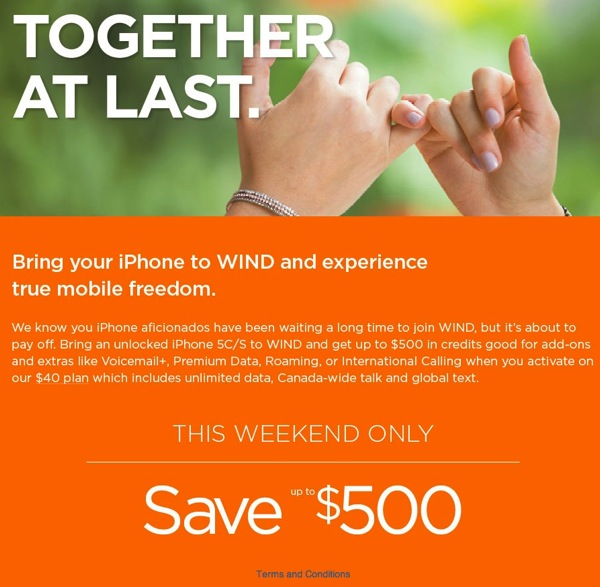 WIND Mobile says it will offer up to $500 in credits toward the following add-ons and extras: Voicemail+, Premium Data, Roaming, or International Calling.

There are conditions though. You need to purchase a nano SIM card ($25) from WIND Mobile and activate on the WIND 40 plan. $25 service credits will be applied monthly up to $500, good only towards add-ons and pay per use charges. Also, if you change away from your monthly rate plan, change your number, or port your number away, the credit promo will cancel.

You also need to consider your LTE iPhone on WIND’s 3G AWS network. If you have decent WIND coverage in your area and you don’t mind not having LTE, this is a lukewarm deal.

This morning we already showed you one of the first iPhone 5s units connected to WIND Mobile’s network, which already has over 2,500 unlocked iPhone 5 users.

The Canadian Radio-television and Telecommunications Commission, the country’s broadcasting and telecommunications regulator, announced on Monday morning its website and phone lines are down for the count, in what appears to be an unscheduled outage. “Please note that our website, its related applications and phone lines are temporarily unavailable, we will update you as soon as […]
Gary Ng
17 hours ago