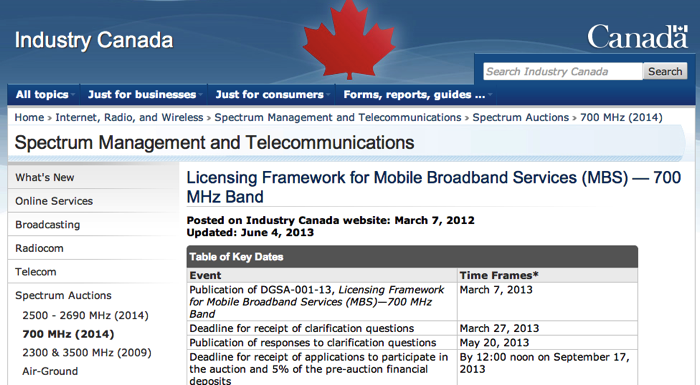 Last week BNN issued reported at least three foreign telcos have considered bidding in Ottawa’s 700 MHz wireless spectrum auction, which has its application deadline set tomorrow at noon, where 5% of pre-auction financial deposits will be required.

The three companies are said to have been Vodafone, AT&T and Norway’s Telenor.

Another source says an overseas foreign telco inquired about the upcoming spectrum auction, but was counseled not to bother. That source declined to identify the company.

Despite Verizon backtracking on its intentions to invest in Canada’s wireless industry, our incumbent players have continued their PR campaign against the Federal government to urge for an auction delay or for a change in rules deemed unfair; it appears there is little the Big 3 can do now with the auction deadline less than 24 hours away.

Accelero Capital Holdings, co-founded by Egyptian telecommunications billionaire Naguib Sawiris, the original backer of WIND Mobile, said in a statement it would not be participating in the auction. It recently acquired the Allstream unit from Manitoba’s MTS:

“Accelero is not currently participating in a bidding process to acquire Wind or Mobilicity and is totally focused on closing the Allstream deal,”

Bloomberg Businessweek reports shorts against TELUS and Bell “have surged” against both companies as the wireless auction deadline looms:

Short positions in BCE Inc. (BCE) last week jumped to the highest since February, and in Telus Corp. (T) the most since April, according to data compiled by Bloomberg and financial-services firm Markit. Bets against Rogers Communications Inc. increased two weeks ago by a third before declining. Short-sellers aim to profit by borrowing shares, expecting the price to fall, then rebuying them at a lower price and pocketing the difference.

Paul Harris, a partner at Avenue Investment Management in Toronto, says since the stocks are not expensive people are shorting them, saying “People feel uncomfortable that somebody may just come in.”

According to Industry Canada’s key dates for the auction, September 23 will be the day auction applicants will be revealed, while the remaining 95% of pre-auction deposits due by noon on October 29. A final list of qualified bidders will be published on November 8 while the actual auction will take place on January 14, 2014.

Bloomberg Industries predicts the auction could result in up to $8 billion for Ottawa, significantly higher than 2008 auction for AWS airwaves. Do you think foreign telcos will participate in the auction?