Sport Chek is an Apple authorized reseller for Apple Watch models, and starting tomorrow, the retailer is offering a 50x Canadian Tire Money bonus on purchases of Series 3 and the latest Series 4 models, as noted in their weekly flyer: 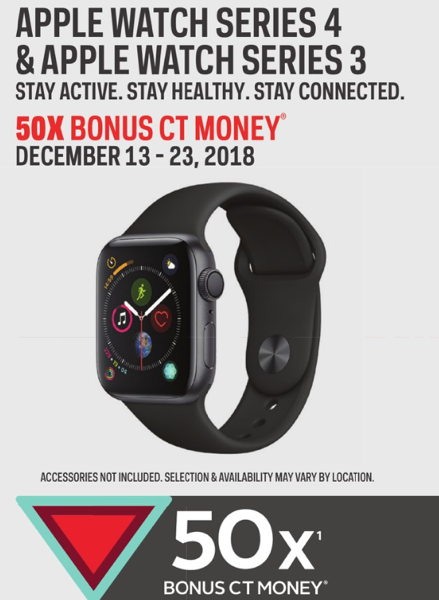 Normally, Canadian Tire Money is worth about a 0.4% cash back, but with the 50x bonus, it works out to 20% cash back, which is pretty huge on the latest Apple Watch Series 4. If you happen to have 20% off Sport Chek gift cards purchased from Canadian Tire recently, you can save even more, at 40% off before tax.

Here’s some example math if you happen to have 20% off Sport Chek gift cards:

The Canadian Tire Money you get back can be used at Canadian Tire, Sport Chek, Atmosphere, or Mark’s. It’s also worth noting the Sport Chek return policy is for unopened merchandise.

Update: It’s worth noting online purchases only let you use max 2 gift cards, but there is no limit at Sport Chek stores. Not all retail locations have Apple Watch Series 4 in stock, so it may be worth calling around.