Costco Deal: $20 Off $100 or More with Masterpass, Works on Apple Products

Costco has brought back their $20 off $100 or more when paying with Masterpass promo. This offer first debuted just over a year ago, but the discount was $25 off $100. 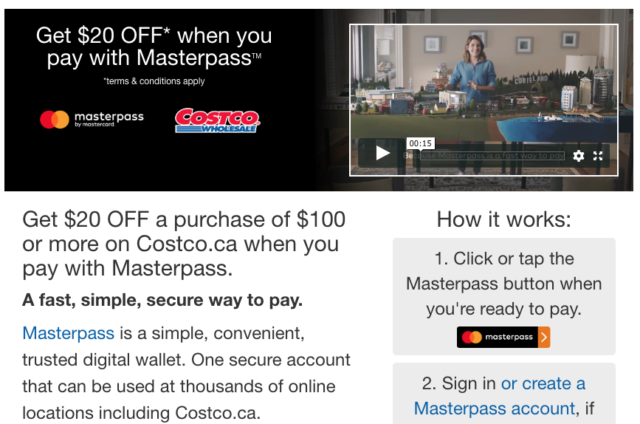 Regardless, if you were about to make a purchase on Costco.ca, you can save 20% off your first $100 purchase with this Masterpass promo, which also applies to Apple products, such as iPad, iPad Pro, iPad mini, Apple TV and iPod.

There are exceptions with this deal, according to the fine print (the first time the promo was around it worked on iTunes gift cards):

In order to jump on this promo, you’ll require a Masterpass account, which you’ll need to use at checkout.

Costco.ca says the Masterpass offer goes from October 9 to December 9, 2018, and is limited to one offer per member during the promo period. Let us know what you’re going to purchase.