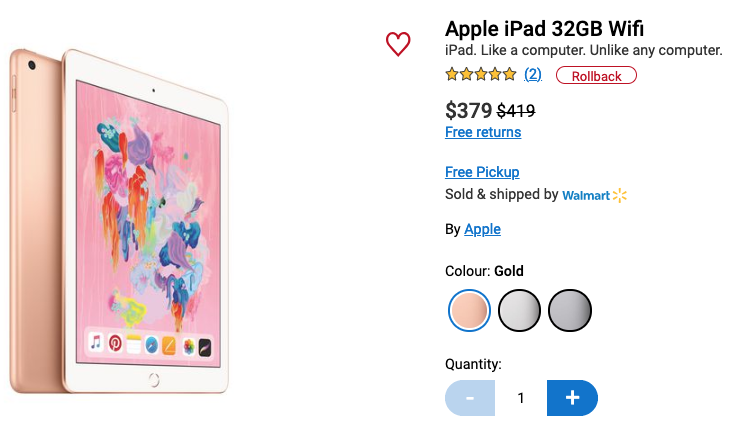 Apple’s sixth-generation iPad is on sale right now from Walmart Canada, offering the tablet for $40 off at $379 with free shipping or in-store pickup.

This iPad last received an update in 2018, gaining a faster processor and support for Apple Pencil. Apple Canada currently sells this iPad starting at $429. Walmart is selling this iPad for $50 cheaper than Apple.ca.

This 2018 iPad is powered by Apple’s A10 Fusion chip and includes Touch ID and a 3.5mm headphone jack. If you’re not ready to fork out extra cash for Apple’s newest 2018 iPad Pro models, the 9.7-inch iPad still makes for a great device at a fraction of the price.

We’ve seen Apple sell refurbished versions of this iPad for slightly cheaper at $359, while back in December, The Source had this iPad available for $349.

Before you plunk down cash, Apple is rumoured to be refreshing the 9.7-inch iPad, possibly coming this year.

Costco Canada notified members today of their Black Friday savings available both online and in-store, offering a variety of deals on tech and more. Check out some of the savings available from Costco.ca below… Apple  Save on Select Macbook Air M1 – $150 OFF AirPods Pro (2nd gen) – $297 AirPods 2 – $149 Apple Watch […]
IIC Deals
2 days ago