One of the least talked about new features of the iPhone 3GS, is the Voice Command feature. Sure, voice commands for cellphones have been around for a while, but the iPhone feature can do more than your average dial commands.

My experience with the Voice Command feature has been a hit and miss. Part of the reason with my utter failures is because I wasn’t aware of all the specific commands. But with testing of the commands it lists on the screen, I have had some success.

Let’s try to improve the Voice Command by listing all the actual commands. This outta help me and all the new iPhone 3GS owners out there. 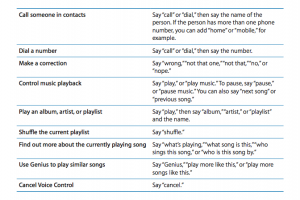 Extra Voice Command tidbits:
– Saying “Help” – this will explain the features above
– Nicknames and abbreviations of contacts can be recognized. EG – “Daniel” can be recognized as “Dan”…try it out!

Big thanks to MacRumors for providing us with this relevant information!