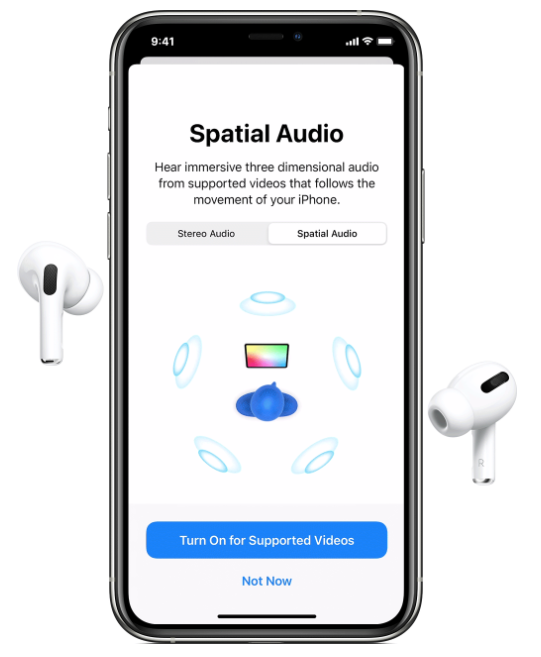 One of the most anticipated and underrated features of iOS 14 is the addition of Spatial Audio for AirPods Pro, which brings 3D surround sound. This is a classic Apple ‘surprise and delight’ feature we’ve come to expect from the company.

What is spatial audio? “Spatial audio with dynamic head tracking brings a theater-like surround-sound experience to the movie or video you’re watching, so that it seems as if the sound is coming from all around you. The sound-field stays mapped to the actor or action on the screen even as you move your head or your device,” explains Apple in a new support document.

How to get set up with Spatial Audio in iOS 14?

First, you will need a set of AirPods Pro and an iPhone or iPad, with iOS 14 or iPadOS 14 or later installed. The following models will support Spatial Audio with AirPods Pro:

You’ll also need “Audiovisual content from a supported app”. Any content that supports Dolby Atmos, such as the latest TV shows and movies from Apple TV+ and Disney+ will work.

You can control Spatial Audio settings and see if it’s actually working in Control Center. Just touch and hold down on your volume control and you’ll see if Spatial Audio is enabled and active or inactive:

Here are some really cool trailers to test directly from Dolby, which sound incredible with AirPods Pro with Spatial Audio enabled:

When you’re listening to Spatial Audio supported content, turn your head to the left—then to the right (try watching Greyhound on Apple TV+ at the 34-minute mark). It’s such a weird feeling listening to 3D surround sound with AirPods Pro and with ANC on, it heightens the effect even more. Spatial Audio increases bass significantly as well.

Does Spatial Audio work with Apple TV 4K? Sadly it does not, and it makes us wonder if Apple is going to bring support in a later update, or add the feature as an exclusive to a next-generation Apple TV, forcing users to upgrade to get it.

How do you like Spatial Audio with your AirPods Pro?