How to Setup Hotspot Shield, Free VPN for iPhone

Update 4 (May 26, 2013): Another VPN solution is SunVPN, which has worked very well for people as well. Check it out here. A similar VPN service many have signed up for is NordVPN, which has servers based out of Panama.

Update 3 (June 2, 2012): Looks like Hotspot Shield VPNs have stopped working altogether on iOS devices. One pretty awesome paid VPN alternative is HideMyAss, which is $6/month and works pretty well on iOS and Android devices. Click here to check it out (it’s currently on sale).

Update 2 (Aug. 17, 2011): It appears Hotspot Shield’s iPhone page is no longer supported, but the service still works. Enter the details as shown below. You can also access Netflix USA with your Netflix Canada account by adding this VPN to your iOS devices.

If you’re browsing on your iPhone on an open WiFi network, you might want to secure your connection with a VPN (Virtual Private Network). If you want to access US-only content and have your IP US-based, you can also use a VPN.

Here’s how to setup your Hotspot Shield VPN on your iPhone (according to their guide):

2. Save the settings and hit the “HOME” button to quit. Make sure to turn Wi-Fi back “ON”.

3. To activate Hotspot Shield on your iPhone, the VPN setting needs to be turned on. 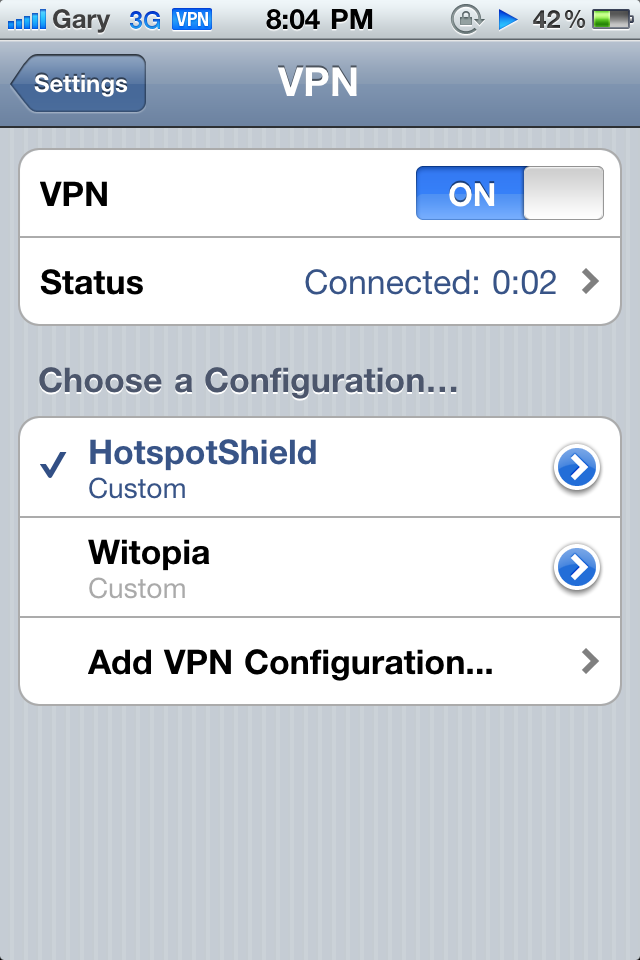 If you entered your info correctly, your status will change to “Connected” and you’ll see a VPN icon appear at the top iPhone tray. If you can’t connect, power down your phone, and turn it back on and try again.

Hotspot Shield worked over both 3G and WiFi.

With Hotspot Shield’s VPN enabled, I was able to make better use of the Skyfire app. Watching content from the US such as The Daily Show worked without a problem. I was also able to use Pandora, which is only available in the US App Store and works only in the USA in Canada. I’ll have a brief tutorial on that later.

Hotspot Shield’s VPN did take a couple tries to setup though. There are various login/password accounts provided and if one doesn’t work, try another (you might have to reload the page in a different browser). I did this and it worked for me.

Also, the VPN doesn’t stay on forever as it will turn itself off after a brief period of time. Nonetheless, for a free VPN solution on the iPhone, Hotspot Shield does the job for your immediate needs. 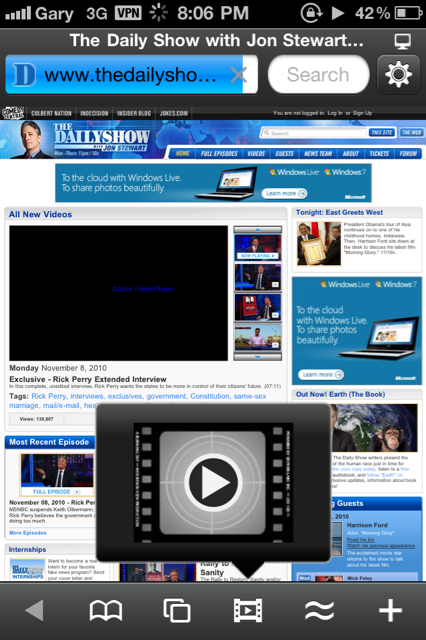 Let me know how Hotspot Shield for the iPhone works for you in the comments!