Snapture: Your iPhone Camera on Steroids

Do you love steroids? You might, but I know your iPhone camera has been waiting for this day. Off topic aside, we touched briefly on this application during our first ever iPhone in Canada Podcast. The 3rd party app is called Snapture, and it’s a program that takes your 2 megapixel iPhone camera to the extreme. Let’s check it out!

…take photos in full color or grayscale
…have a 3x digital zoom
…snap pictures by pressing anywhere on the screen, or the up/down volume buttons (love this feature!)
…take pictures with a 5 second self timer
…snap 3 pictures in burst mode
…choose between 3 image sizes
…enable a “silent mode” for those times when you’re stalking friends and family
…use a leveler to ensure pictures are straight
…and toggle auto rotation!

One of the best things about Snapture is that it’s free! It’s entirely funded by donations at the moment! This program is feature-rich and it’s super easy to use. I would recommend everyone to download it now via Installer!

I did have some issues with Snapture though. Pictures taken cannot be seen via my Camera Roll, but can be seen when I connect my iPhone to the computer via the Apple iPhone folder. Anyone else experiencing this? 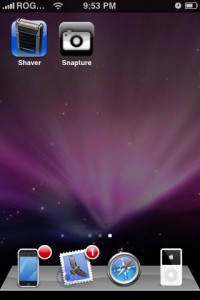 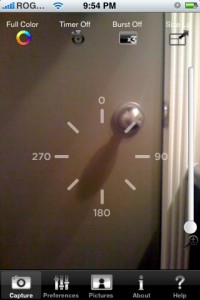 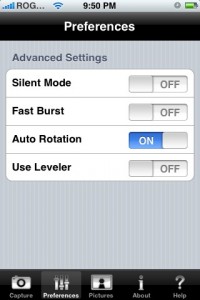 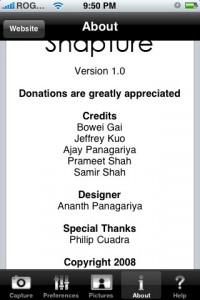