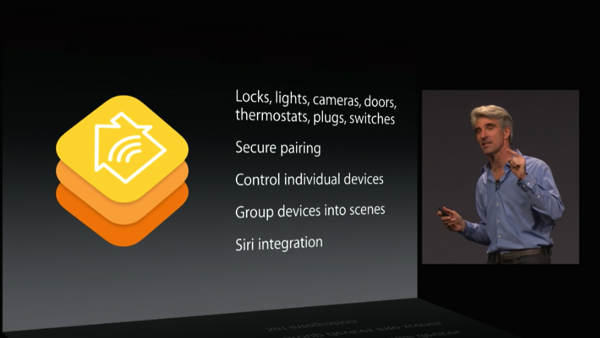 In line with previous rumours, Apple introduced today a new software development kit (SDK), with which Apple enters the world of the “Internet of things”: HomeKit. To create HomeKit, Apple has worked with leaders of home automation.

With HomeKit, users can pair their devices with locks, lights, cameras, doors, thermostats, plugs, and switches; control individual devices; and group devices into scenes. As always, Apple emphasizes security and privacy by moving into your home.

As Craig Federighi highlighted on stage, it even works with Siri. Users can say “Get ready for bed,” which triggers a whole system of garage doors closing, lights turning off, etc.

While initial reports talked about Apple following the example of Google or Samsung with new products that transform the user’s home into an iHome, a recent GigaOm report calmed down the spirits, insisting that Apple’s move into the smart home won’t be as big as customers may be hoping for.