Caution: Don’t Upgrade to iCloud Drive Yet in iOS 8

Last year, iOS 7 almost “broke the Internet” as users rushed to upgrade to the redesigned mobile operating system. Well, today is the day that Apple will officially release iOS 8 to the public, and it comes with plenty of new features to tempt you into an upgrade.

One such upgrade is iCloud Drive, a new service that will allow you to store all your presentations, spreadsheets, PDFs, images, and other documents in iCloud, and access them on any of your devices. Any edit you will make on one device will appear on all of them.

There is one tiny issue with iCloud Drive though: it is only compatible with iOS 8 and Yosemite, so until the desktop operating system drops next month, you won’t be able to sync your iPhone to your Mac (which is running another version of Mac OS X). 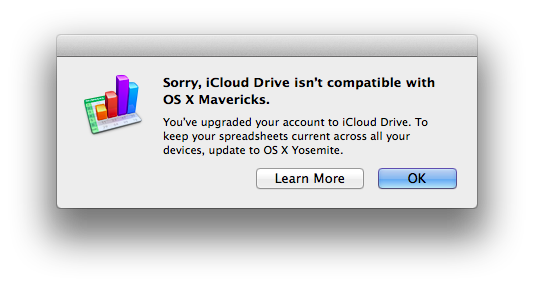 So when you upgrade to iOS 8 later today, make sure you resist the temptation and say, “Not Now” when Apple asks you if you want to upgrade to iCloud Drive.

Of course, this doesn’t mean that you won’t be able upgrade to iCloud Drive anytime, but to preserve your neurons, wait for the official Yosemite release.