Amazon Fires Up Homepage Ad to Target the iPad mini

Amazon.com has launched a new campaign that targets the iPad mini on its homepage. Apple’s latest 7.9″ tablet was touted as a better choice compared to 7″ widescreen tablets such as the Google Nexus 7 and Amazon Fire HD.

Amazon has fired back at Apple by launching a full scale mockery of the iPad mini on its homepage. It starts off with a quote from a Gizmodo (of all places) and then compares their Kindle Fire HD to the iPad mini. 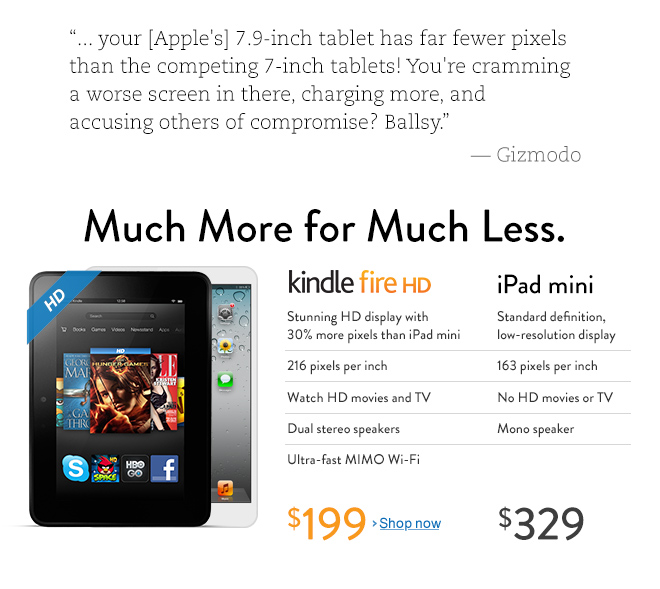 Amazon told AllThingsD it had the ‘biggest day of sales’ the day after Apple’s iPad mini event. It’s unfortunate we’ll never know what this really means, because Amazon doesn’t release sales numbers on any of its products:

Amazon spokesperson Drew Herdener reported they were selling better than usual. “Wednesday was the $199 Kindle Fire HD’s biggest day of sales since launch and up 3x week over week,” according to a statement emailed to AllThingsD.

Although it’s a worthy comparison by Amazon, their ecosystem is limited to the US and the UK. For example, movie rentals are available in 62 different countries via iTunes, whereas Amazon just has two.

Check out this excellent graph by MacStories that notes the percentage of world population with access to various ecosystem services from Apple, Microsoft, Google and Amazon:

What do you think of this new campaign by Amazon? It’ll be interesting to see how long Amazon can continue to sell their hardware at cost in the long run and still make a profit, unlike their most recent fiscal quarter net loss, the first in years.