Apple is now guaranteeing new iPad mini orders on its website before Christmas to Canada and the USA. Its instructions to customers on Apple.ca states:

Order iPad mini by midnight December 4 for guaranteed delivery before Christmas. Check cart for details. Or buy at your favourite Apple Retail Store. 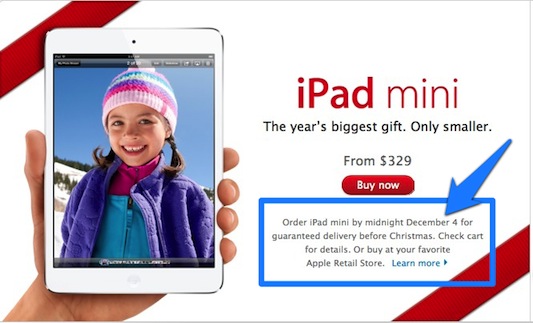 As for shipping times, the iPad mini still notes a 2 week window on Apple.ca. LTE iPad mini pre-orders started shipping yesterday and are slated for delivery by this Friday for some.

For U.S. customers, Apple also notes the same description but the cut off date is a day later, midnight on December 5th.