Apple has launched sales of the Retina iPad mini and online sales are now live in Canada, with prices starting at $419 for the 16GB Wi-Fi model. Shipping estimates are at 1-3 days for Wi-Fi models and 5-10 days for cellular models: 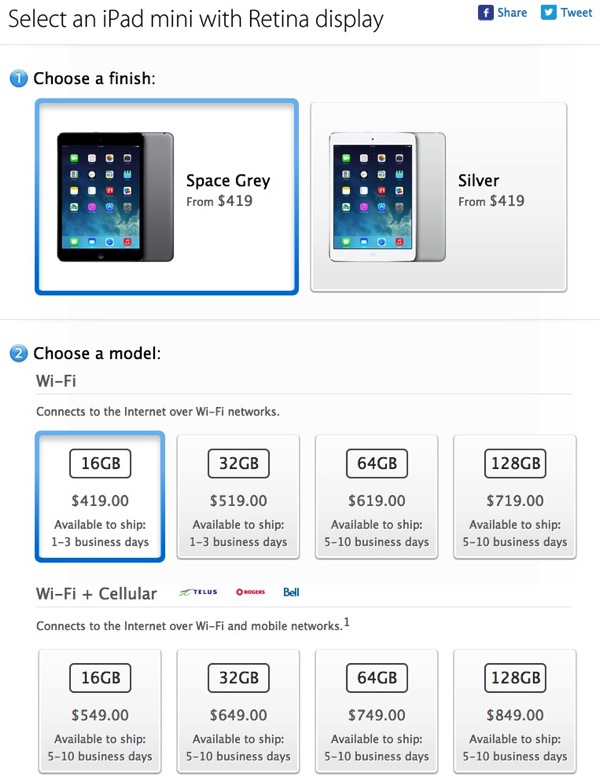 Users can pay $14 more for expedited shipping and have estimated delivery dates of Nov. 20-22:

Also, if you do decide to change your mind after pulling the trigger–you have until January 7 to return your Retina iPad mini:

Items purchased at the Apple Online Store that are received between November 1, 2013 and December 25, 2013, may be returned through January 7, 2014. Please note that all other terms and conditions provided in the Apple Online Store Sales and Refunds Policy are still applicable with respect to such items purchased. All purchases made after December 25, 2013 are subject to the Standard Return Policy.

Earlier this evening, rumours pointed to the launch but claimed Canada would not be included—fortunately that wasn’t true. Let us know if you’re going to order your Retina iPad mini!

Apple has released a new video tutorial on its YouTube channel, showing how to create an alter ego on iPad using Procreate: Learn how to use Procreate to make an alter ego portrait on iPad with Apple Pencil. Get hands-on with brushes and layers in Procreate, guided by tips from artist Temi Coker and Creative...
Gary Ng
4 weeks ago