iFixit and Chipworks have performed teardowns of the latest 4th generation iPad (model A1458), with the latter promising a closer look at the A6X chip die markings in the morning. Here’s a close up look at the A6X by Chipworks: 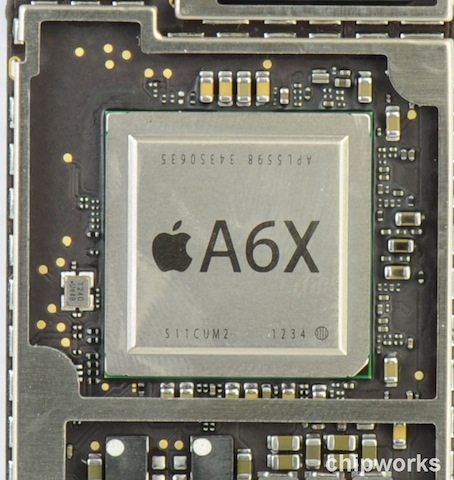 iFixit’s teardown reveals not a lot has changed internally in the new iPad 4, aside from the addition of the A6X SoC which Apple claims will double the performance of the former iPad 3. Their iPad 4 unit did come with a display from LG instead of Samsung. The new 1.2MP FaceTime HD camera (Chipworks says it’s an Omnivision unit) is 0.4mm thicker but still fits in the same spot as before. Like the iPad 3, iFixit notes lots of adhesive holds the tablet together and gives it a repairability score of 2 out of 10 (with 10 being the easiest to repair).

The iPad mini Uses Samsung’s 32nm Process for the A5

Earlier today Chipworks confirmed the iPad mini contains a Samsung 32nm A5, which was first discovered in second generation iPad 2 units and Apple TV 3. This smaller (and more efficient) processor is also found in the 5th generation iPod touch and measures 8.19mm x 8.68mm compared to the original 45nm A5 at 10.09mm x 12.15mm as seen below: 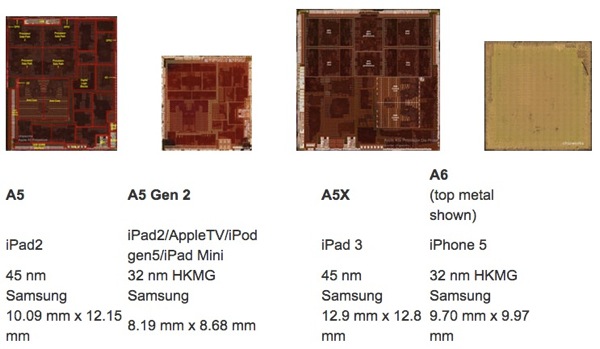 The iPad mini and 4th gen iPad is set to launch on November 2nd, today. Which iPad did you buy this time around?