iPad Remains the Tablet of Choice, but Samsung is Catching Up

Apple’s iPad, which debuted four years ago and generates over 77% of North American tablet web traffic, continues to dominate the market as the tablet of choice. However, it appears that Samsung and other competitors are finally catching up, Re/Code is reporting. According to online ad network Chitika’s latest numbers, Apple’s tablet share is down 4% from a year ago, while Samsung has seen its usage share grow to 8.3%, up from 4.7%. 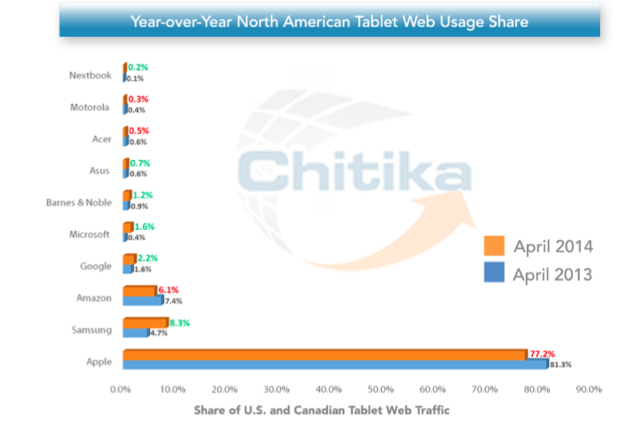 Amazon, which had the second largest web share last year at 6.1%, saw its share go down more than a percentage point. The report points out that in terms of market share, as opposed to web traffic share, Apple leads the tablet market by a narrower margin. Research firm eMarketer has predicted that Apple will still hold the majority of the tablet market this year with 51.8% share, which is down nearly 3% from last year.

“Though maturing, the tablet audience is still growing, eMarketer says. It notes that about 22.8 percent of the U.S. population used an iPad at least once a month last year, with 42 percent of Americans using a tablet of any flavour”.

A recent report also indicated that nearly half of the analysts at Wall Street are betting on a decline of iPad sales. Of course only Apple will reveal the actual iPad numbers when it reports earnings later today.