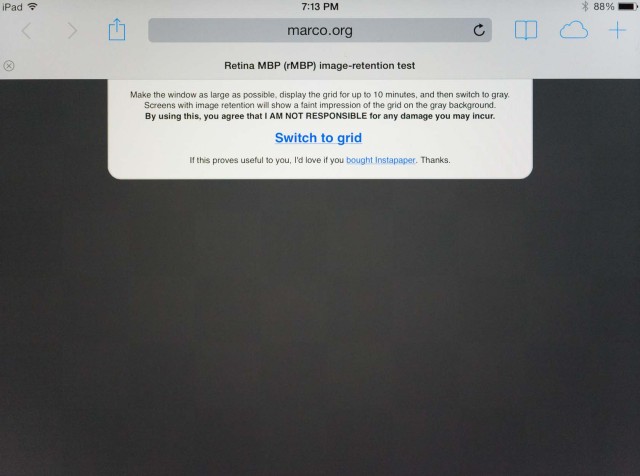 Before the iPad mini launch, multiple reports surfaced that Apple had manufacturing issues with the Retina display of the smaller tablet, with the latest claiming panels manufactured by Sharp are suffering from display burn in. And it turns out the rumours are true.

In a blog post, Marco Arment notes that the problem was also present in the first-generation 15-inch Retina MacBook Pros, so last year he made a test page to find out whether his device had the issue or not. It had.

This problem was also present in many first-generation 15” Retina MacBook Pros, including mine, which I discovered by making a test page that first shows a large black-and-white checkerboard pattern for a few minutes […].

If the LCD panel has an image retention issue, a faint impression of the checkerboard will still be visible on the solid gray image, usually fading over the next few minutes.

Yesterday he used the same test page and found that his Retina iPad mini failed as well.

As he points out, not all iPad minis with Retina display have this image-retention issue, because Apple uses not one, but multiple suppliers. You can test if your iPad mini has image retention issues, by heading to this test page made my Marco.

If you find that your device has the issue, you can try an exchange in the next couple of weeks as the supply improves.