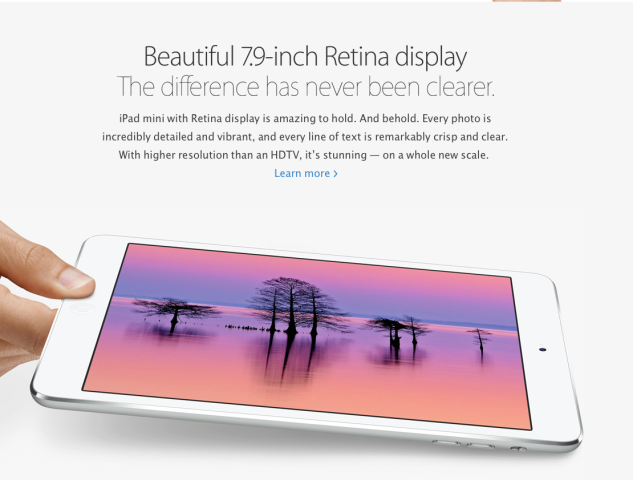 Apple has introduced the iPad mini with Retina display alongside the iPad Air. The latter is already available in stores, but unfortunately, the launch of the smaller tablet with the highly anticipated Retina display has been delayed. The Korean ETNews has apparently found out why (via AppleInsider).

According to information obtained by the Korean newspaper, Apple is delaying the launch of the iPad mini because of a yet unsolved LCD burn-in problem. Although the burn-in is invisible to the naked eye, Apple can’t use the displays, as they do not meet its technological standards.

As the newspaper’s sources point out, the issue comes from Apple supplier Sharp, which has issues with its advanced IGZO display technology, which accounts for the low-yield rates for Retina panels for the iPad mini 2.

Sharp is Apple’s secondary provider of iPad mini display panels, taking responsibility for 40% of all orders. The other panel supplier for the small tablet is LG Display, which, according to Digitimes‘ sources, accounts for 60% of all orders, but uses a different a-Si process.

Rumours of Sharp’s low display yield surfaced shortly after the iPad event. Even Tim Cook said during the earnings call that it is unclear as to whether Apple will have enough supply for the iPad mini with Retina display.

Apple, however, is addressing the issue by contacting other suppliers, and it has reportedly turned to Samsung to provide displays for the iPad mini.