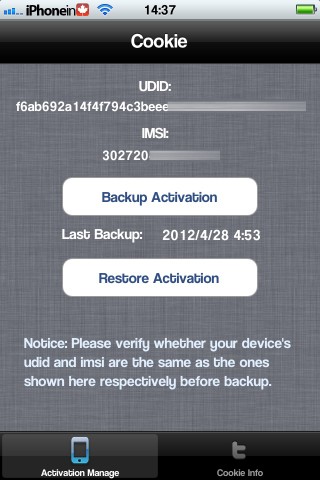 There has been a lot of talk about the SAM unlock recently. Early today we told you that it seems this new software unlock has stopped working, as Apple has updated their servers to block it. If you did get to use the unlock, before Apple shut it down, then you have your activation ticket on your iPhone. You’ll want to backup this ticket before restoring your iPhone. You will then be able to always unlock your jailbroken iPhone, even after a restore, or switching carriers.

A new app in Cydia called “Cookie” allows you to easily backup your activation ticket, and restore it for future use.

Cookie can Backup your iPhone Activation Tickets to Cloud, and once you backup it, you can Restore it to your iPhone ANY TIME! Ticket data is stored on weiphone servers.

Use this if you have Activation Tickets gotten by SAM trick, do it before it’s too late.

To use this, you must have already unlocked your device with SAM. You simply install Cookie from Cydia. Open the app. Tap “Backup Activation”. That’s it. The app uploads your activation ticket to weiPhone’s servers for safekeeping. To restore the ticket, just tap “Restore Activation”, and you ticket is downloaded to the same place it was uploaded from. You will then be able to unlock again.

There are a couple of other methods to back this up if you are not comfortable trusting weiPhone’s servers. You can manually back them up yourself, or use the latest version of Redsn0w to backup your activation ticket.

Cookie is available in the Cydia, under the Big Boss repo, for free.