Hackulous Shuts Down, Kills Piracy App Installous With It [Update] 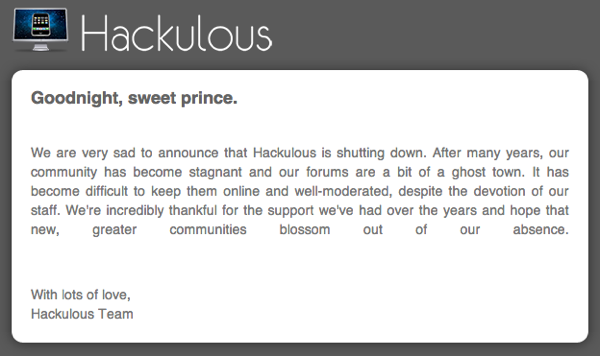 During the height of the iOS jailbreaking scene, numerous users eagerly anticipated new jailbreak releases to get their hands on Installous again, the popular and controversial piracy app made by the Hackulous team.

The app allowed users to pirate pretty much every iOS app you could think of and at the end of the day it hurt the bottom line of developers. Some users relied on Installous to ‘try out’ new apps before buying, while others just pirated apps. Regardless, the service was a black eye for Apple and its hardworking iOS developers.

Now, it appears some change has arrived as the Hackulous team has announced it has shut down for good. Their website made the following announcement today:

We are very sad to announce that Hackulous is shutting down. After many years, our community has become stagnant and our forums are a bit of a ghost town. It has become difficult to keep them online and well-moderated, despite the devotion of our staff. We’re incredibly thankful for the support we’ve had over the years and hope that new, greater communities blossom out of our absence.

With lots of love,
Hackulous Team

With the state of the iOS 6 and iPhone 5 jailbreaks up in the air, it appears the Hackulous Team feels the “community has become stagnant” and blames the lack of activity on their forums as a reason for calling it quits.

For now, Installous is no longer available but you can bet others will pop up to keep it going somehow in the future. Back in June, Installous 5 was updated to introduce BitTorrent downloading.

Have you ever tried Installous for downloading free apps?

Update: TorrentFreak has unsuccessfully tried to contact the Hackulous founder ‘Dissident’ for an update as they have been in contact before. But the site was able to get some info from people ‘familiar’ with site operations:

We did manage to speak to two other people familiar with the sites’ operations and they told us they were surprised at the decision due to a number of factors.

The sites were apparently healthy and still had plenty of users. Indeed, the shutdown statement appears to carry a contradiction – “ghost town” forums are by their very nature not particularly difficult to keep “well-moderated” since nobody uses them. Nevertheless, this is the cited reason for the shutdown.

Your guess is as good as ours as to why Hackulous shut down suddenly. Insert your conspiracy theory below in the comments.