How to Install Cydia 1.1 on your iPhone

Earlier we wrote about Jay Freeman, aka ‘Saurik’ updating Cydia to a newer and faster version. Saurik released Cydia 1.1 today and announced it on twitter:

Cydia 1.1: faster, slimmer, and more stable; including an improved search algorithm and “resume where you left off”. Available in Cydia now!

How to upgrade/install Cydia 1.1 on your iPhone

1. Launch Cydia. Tap on the Changes tab along the bottom.
2. You’ll see upgrades available for Cydia Installer. Tap Upgrade and Cydia 1.1 will install.

3. Once the install completes, tap the ‘Close Cydia (Restart)’ message. Upon reloading Cydia, you should see 1.1 in the bottom right on the main page. 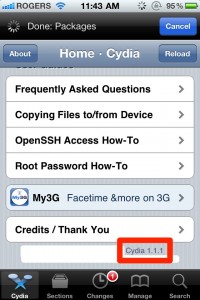 Saurik notes that Cydia 1.1 will remove older default packages, which is normal. Repositories aren’t deleted, they are just managed differently.

Currently, third-party repos are having trouble keeping up with the huge “1.1 rush”, according to Saurik on twitter:

Apparently the “1.1 rush” (130,000 users in 3 hours) is hammering many third-party repositories (like BigBoss): please be patient with them.

I just upgraded to Cydia 1.1 on my iPhone and the speed differences are noticeable, however some repos are having difficulty with the sudden spike in traffic. Kudos to Jay Freeman for this huge upgrade. Let me know how your Cydia 1.1 install goes!