iPhone 4S Users: Do You Miss Your Jailbreak?

With iPhone 4S in the wild now, and with millions of sales, no doubt there are some folks out there coming from a jailbroken device to a non-jailbroken device. I have had my iPhone 4S for almost a week now. I am coping without my jailbreak, but I am going through some withdrawl.

Probably the biggest change for most folks, would be the iOS update, to iOS 5. All the new features, alone, make the iPhone all new. Many of these new features seem to be inspired by some popular jailbreak tweaks and apps, so there are some things I can live without, from Cydia. The big difference is, if you still have any device older than the iPhone 4S or iPad 2, you can jailbreak on iOS 5. So, what are we new device owners missing?

Within the first few hours of using my new iPhone 4S, I immediately was missing 3G Unrestrictor. This tweak removes certain 3G restrictions that Apple builds in to iOS. With this tweak installed, you can download apps that are more than 20MB. You can watch high quality YouTube videos, while on the go, and most importantly, for me, you can use FaceTime while on your 3G network. I have really been missing this tweak.

SBSettings is most likely one of the most popular tweaks in Cydia. SBSettings gives you quick access to some settings you use all the time. It has grown so much over the years, and it’s recent update to integrate itself into Notification Center was perfect. I used SBSettings many times a day, and definitely miss it now. 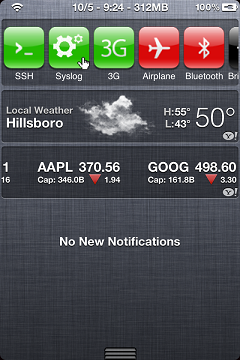 Those are my 2 biggest omissions from iOS 5, that I could get from Cydia. Some others I’ve been missing, but doing okay without are: Infinifolders (enables the ability to put an infinite amount of apps in one folder), biteSMS (a more in depth messaging app, with a quick reply feature that allows to send messages without leaving your current app), and Springtomize (allows you customize many different aspects of your SpringBoard, customizing the look of your OS). We’d love to hear from you, and see what you’ve been missing. Comment below, or head over to our newly re-launched forums!

So, what is the status on the iPhone 4S/iPad 2 jailbreak for iOS5? Well, there isn’t one. That’s the short version. If you like to follow the rumours and stuff, there are apparently a few known userland exploits in iOS 5, that the Chronic Dev Team are working on, to create a new jailbreak tool for the new devices. There is also a possibility of a new version of JailbreakMe.com. As you may know, the developer behind the last couple of iterations of JailbreakMe, comex, is now doing an internship with Apple, so he will not be directly developing jailbreaks right now. However, Saurik (owner and developer of Cydia) has purchased the domain www.JailbreakMe.com. This keeps the domain in good hands, in case a userland jailbreak is found, and developed into something that can be released to the public.