For those with a jailbroken iPhone 4, specifically a tethered jailbreak, the Rocky Racoon 5.1.1 Untether package has been updated to version 1.0-2.

The update brings support for the newest iPhone 4 (GSM) iOS 5.1.1 build 9B208 that was released last week.

With this package installed, users can turn their iOS 5.1.1 jailbreak into an untethered one, whether the jailbreak was done with Absinthe or other tools.

In other words, if your iPhone 4 has the newest build of iOS 5.1.1, and it’s a tethered jailbreak, Rocky Racoon version 1.0-2 will make the jailbreak untethered. This means you do not have to re-jailbreak your device every time it powers off.

The update is now available in Cydia. 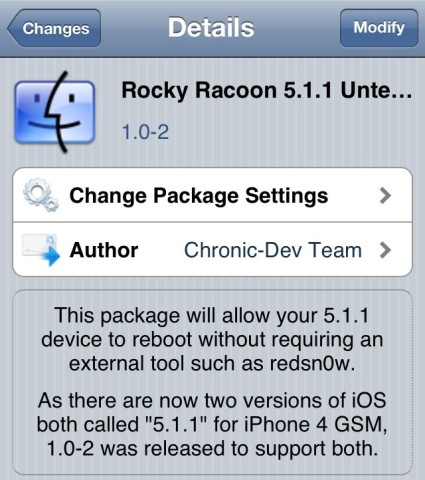