Peter Hajas has just released MobileNotifier beta4 (decadent dinobites as he calls it), and it’s now available in Cydia. MobileNotifier gained a lot of attention for improving iOS notifications, and this new version brings some new changes.

– Brand new alert style that lives in the doubleheight statusbar. Takes unobtrusive notifications to the next level!

– Totally redone lockscreen view. Tap the bar to see a preview of your pending notifications!

– Intelligent alert dismiss – alerts from the same sender are dismissed if you take action on one of them. Way easier to deal with!

The new alert style that is above the status bar is much welcomed. Previously, it took up way too much real estate on your homescreen. Also, you can now clear pending notifications via double tapping the home button with one tap, whereas before you had to delete manually. I do wish there was an option to get new sound alerts instead of just tri-tone.

I’m going to give this new beta a try over the next few days. This is only available on 4.x firmware. Give this a try–add the following repo to Cydia:Â phajas.xen.prgmr.com/repo to download.

Check out pictures below: 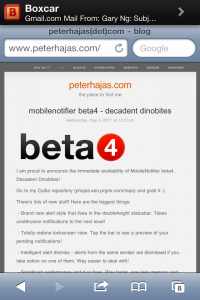 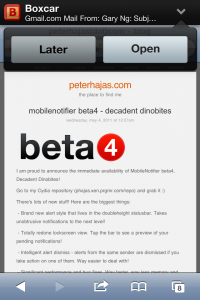 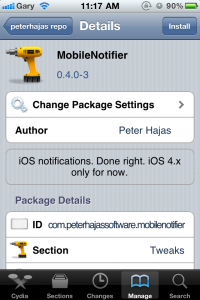 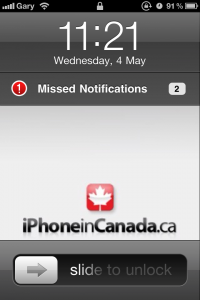 Let me know how you like MobileNotifier beta4 below!