It’s been a while since we’ve anything about jailbreaking iOS 5.1 on the newer A5 devices and the new iPad. Within 24 hours of the launch of the new iPad we had what seemed like 4 different ways to to go about jailbreaking the newest device on the newest firmware. We even had a few “proof of concept” pictures and videos. The iPhone Dev Team, the Chronic Dev Team, and pod2g are all still working on it, and pod2g has given us a little update on his progress: 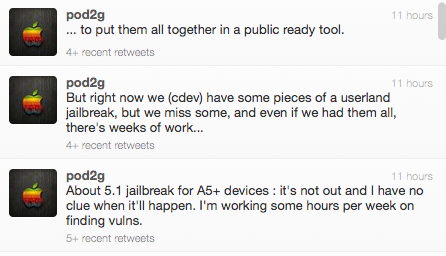 From pod2g’s Twitter feed, in the image above, you can see that we are no where close to a public release from pod2g and the Chronic Dev Team. It sounds like they do not have a full jailbreak, to make it useful for the public, yet. He says he is still working on finding vulnerabilities in the firmware/hardware. These are still the initial steps of creating the tools needed to release to the public.

Musclenerd, of the iPhone Dev Team, also showed off his iPad 3 jailbreak shortly after launch, but has been pretty quiet about it, since. I sure miss the days when comex and geohot were on the scene. We’d have this nut cracked already! 🙂