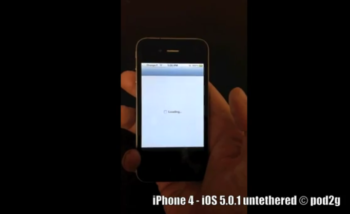 Another day, and another update from pod2g in regards to the iOS 5.0.1 untethered jailbreak. He has decided to hand over the A4 jailbreak to the Chronic Dev Team to test and release, so he can focus his efforts on the A5 jailbreak (iPhone 4S, iPad 2) before iOS 5.1 is released:

I read the comments on the blog, and I know that a lot of people are waiting for the A5 jailbreak.

Also, I know there are tons of people out there with A4 or even earlier devices who wants the untether now and don’t care about it could be interesting to wait A5 is finished to release or even 5.1, so that we don’t waste an exploit that took me months to find and develop.

I need to focus on A5 and hope I can find a path quick, and I have the feeling that chronic-dev could help me.

So, here is what I did:
– I gave all the details to the chronic dev team so that they can finish, test, integrate and release the A4 jb ASAP.
– I’ll put all my energy from now on on the A5

It’s great that these guys can work together. Good luck pod2g and kudos to the Chronic Dev Team for accepting his request for help.