Good morning! We have some exciting news this early Tuesday! It looks like the iPhone Dev Team has been hard at work once again! They have just released PwnageTool 3.1.4 (Mac only) which will let you create a custom 3.1.2 firmware, allowing your iPhone to stay unlocked! Here’s a quick summary of their most recent blog post:

1. GOLDEN RULE: If you are using a iPhone 3G or iPhone 3G(S) with ultrasn0w and rely on ultrasn0w to obtain cellular service then you should only update your device with an .ipsw that is made with the new PwnageTool. There are no second chances with this. You need to remember that PwnageTool will provide an upgrade path to newer versions of the iPhone software in the future.
2. Please read all parts of this post before downloading and using these tools.
3. Read items 1, 2 and 3 again and again.
4. At the bottom of this post are the bittorrent files for the 3.1.4 capable version of PwnageTool.
5. PwnageTool will work for the iPhone 3GS
6. PwnageTool will work for the iPod touch 2G
7. PwnageTool WILL work for Original iPhone (1st Generation), the iPhone 3G and iPhone 3G(S) and the iPod touch (1st Generation and 2nd Generation) but NOT the iPod touch 3rd generation.
8. For 3G and 3G(S) users who are Pwned, PwnageTool is your key to updating in the future, just remember to never install an update directly from Apple, always use an .ipsw that has been created with PwnageTool.
9. There is no Windows version of PwnageTool it is a Mac OS X tool only, we are not developing a Windows version of PwnageTool.

My advice anytime there is a new release of a jailbreak tool is to wait at least a day or so before attempting. This way, any problems you run into will be well documented on the net. But if you’re itching to update to 3.1.2…go right ahead and let us know how it goes! I’ll be performing this update shortly! 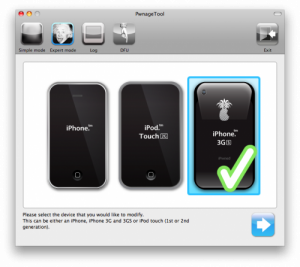