A few days back, the popular Sparrow iPhone app went live in the App Store as the first real viable alternative to Apple’s Mail app. Sadly, the app was released without “push notifications” since the feature was pulled by Apple before approval, due to the fact that Sparrow team was caught using an API reserved for VoIP apps. As a temporary workaround, we published a tutorial on how to set up Boxcar for Sparrow mail push notifications. But now, we have ‘Sparrow Push‘, a free Cydia tweak for jailbroken iPhones and iPod touches which adds native push notifications to the Sparrow iOS app. 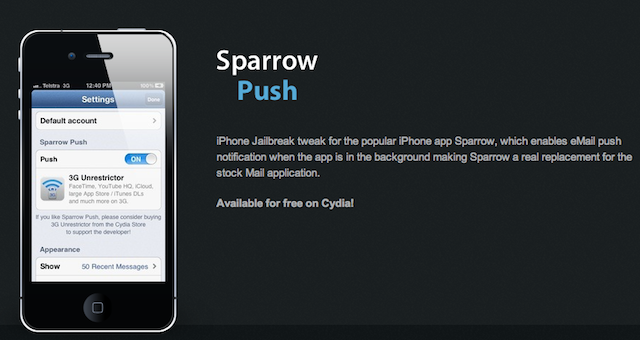 iPhone Jailbreak tweak for the popular iPhone app Sparrow, which enables eMail push notification when the app is in the background making Sparrow a real replacement for the stock Mail application.

Sparrow Push uses a very efficient implementation using the same APIs that VoIP apps like Skype use. Since there is an additional, permanent internet connection and Sparrow becomes active everytime there is activity in the email account, there will be a higher battery usage, but it should be comparable to what Apple Mail’s exchange push implementation is.

You can download Sparrow Push tweak for free on Cydia via BigBoss repo.