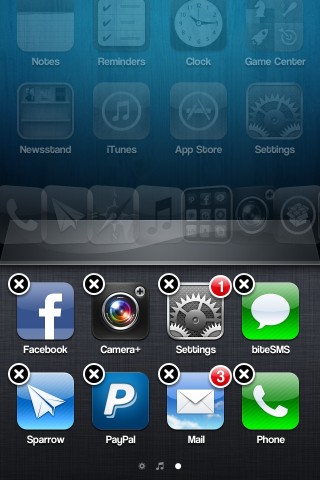 Switchy is a new tweak for the app switcher in iOS. It doubles the size of your switcher, allowing you to see more apps that are running in the background. It also enhances the iPod controls by adding more info for whatever music is playing. They have added a “Settings” page to the switcher that gives you quick access to your Settings app, and has a “Clear Apps” button. This button is basically a kill all switch, and closes all the apps in the switcher. 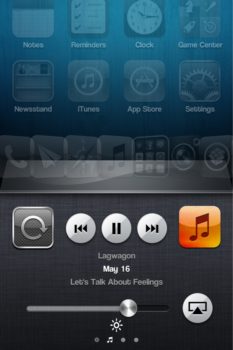 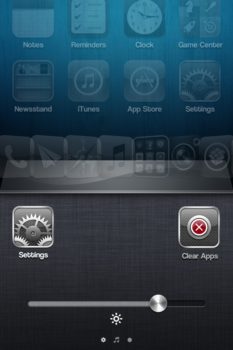 Switchy makes the task switcher how it should’ve been from the start.

Brent Caswell’s concept for a better task switcher is brought to life in this tweak. Working closely with Brent, his design choices took top priority. Switchy delivers the fully functional product that he envisioned.

Switchy expands the task switcher to include two rows of icons. It adds Artist and Album information to the Now Playing area, bringing it together with not only more information but also by adding a volume slider to the same area.

The much requested “Clear Apps” button is added into a new page dedicated to settings. The settings page is also a quick way to adjust the display’s brightness, as well as functioning as a shortcut to the Settings app.

Visit the website for support and to request any further features you’d like to see in Switchy.

No options to configure.

There a lot of tweaks that I try out and think, “That’s kinda cool.”, then never use them again. I can see myself keeping this one on my iPhone. It is designed well, fitting in with Apple’s design of iOS. I am also using SwitcherMod on my iPhone 4S, and there seems to be no conflicts. There does seem to be a conflict with Springtomize, as I have it set to show five apps across. Switchy seems to be overriding that. Not a big deal, since I now have 2 rows of apps in the switcher.

I have just a couple of criticisms about this tweak. The iPod controls page seems to have a glitch. Where it should have a volume control bar, there is a brightness control bar, but it is still affected by the volume buttons. Hopefully this will be fixed in the next update. Also, I would like to see the settings page customizable. We could add a couple more apps there. Perhaps an SBSettings button?

Switchy is compatible with iPhone and iPod Touch, on iOS 5 or higher. You can get it now for $1.00, in Cydia, under the Big Boss repo.