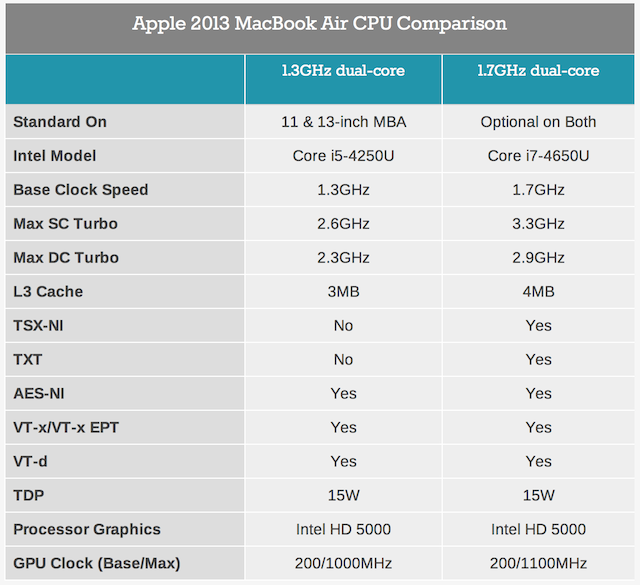 Apple offers the 2013 MacBook Air with two CPU options, the base CPU i.e Core i5-4250U and a BTO-only upgrade i.e Core i7-4650U. The folks over at AnandTech have taken a closer look at the two dual-core processors, testing their performances and comparing them to older MBAs as well.

The source notes that the default Core i5 option ranges from substantially slower to a hair quicker than last year’s model. However, users upgrading from older machines won’t notice the regression since the newer models feature a much faster SSD, better graphics and better CPU performance than last year’s MBAs. However, users who opt for the Core i7 BTO upgrade, will get an extra 1MB of L3 cache and much higher turbo frequencies (see comparison above).

” The default Core i5 1.3GHz (4250U) delivers the best overall battery life regardless of workload. Its performance is often somewhere in between a 2011 and 2012 MacBook Air depending on workload, although in some cases it’s possible to see equivalent performance to an upgraded 2012 MBA. If you need more performance however, the 1.7GHz Core i7 upgrade (4650U) delivers. In most situations you get more than a 20% increase in performance, bringing the platform up to somewhere in between last year’s 1.7GHz Core i5 and 2.0GHz Core i7 options.”

So for those who want the ultimate battery life regardless of usage model, should stick with the base Core i5. For those seeking performance, the Core i7 upgrade ‘is absolutely worth it’.