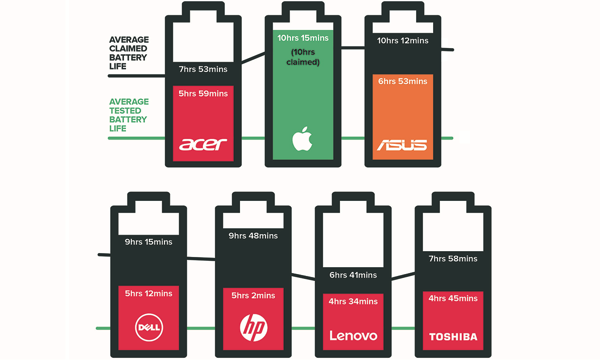 After testing Apple’s latest laptop offering, Which? (via 9to5Mac), a UK-based consumer tech testing organisation, had results similar to those of Consumer reports: “Our tests found that with Apple MacBooks, you could meet or even exceed the claimed battery life.”

Without specifying the tested MacBook Pro models tested, Which says the 13-inch model delivered 12 hours of battery life. (Apple claims 10 hours of battery life.) Which does mention, however, that it has tested three Apple devices. This could mean they have tested the old Retina model, the 2016 model without Touch Bar or the 2016 model with Touch Bar, or that they have tested three laptops from one line. We don’t know.

An interesting highlight of the Which report is the battery life of other laptops tested: The Lenovo Yoga 510 lasted only 2 hours and 7 minutes, which compares to the five-hour battery life the manufacturer claims. Another example would be the HP Pavilion 14-al115na: HP claims 9 hours, but the tests show only 4 hours and 25 minutes.

As for Apple’s 2016 MacBook Pro: how’s your battery life? Can you squeeze out more than 10 hours?